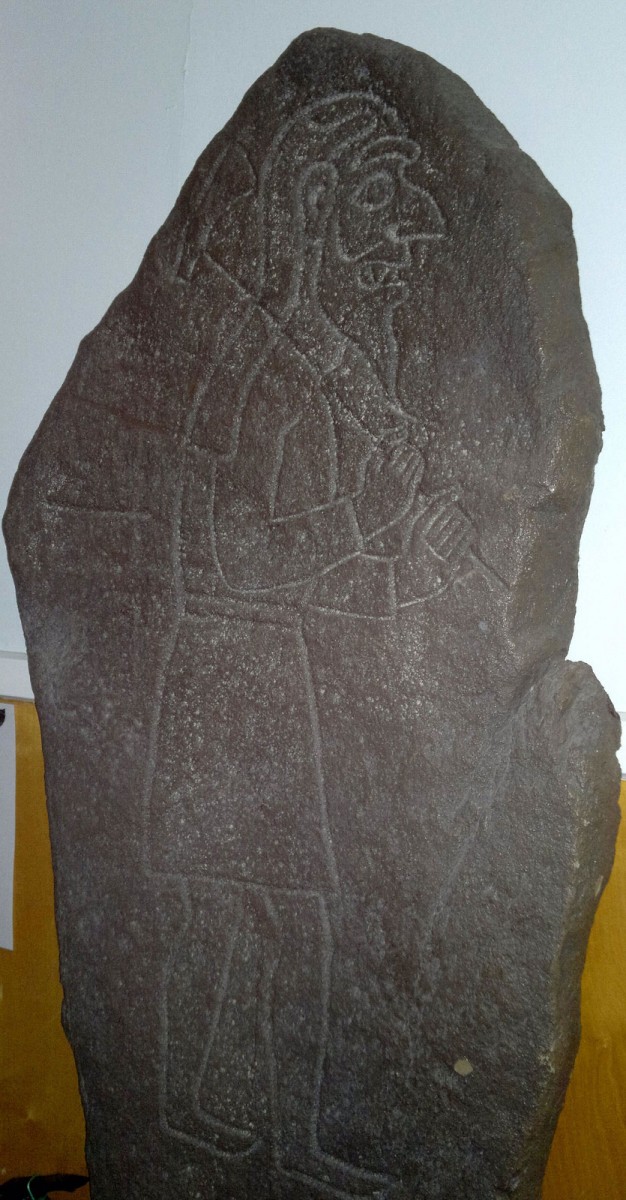 Archaeologists aim to unravel the mystery of the Rhynie Man

A team of archaeologists from the University of Aberdeen are leading a dig which they hope will yield answers to the mystery of Aberdeenshire’s ‘oldest man’.

When a farmer ploughing an Aberdeenshire field in 1978 uncovered a six-foot high Pictish stone carved with a distinctive figure carrying an axe, it quickly earned the name the ‘Rhynie Man’, coined from the village in which it was found.

But in the decades since its discovery, little more is known about the Pictish figure, who he was or why he was created. Now a team of archaeologists from the University of Aberdeen are leading a dig which they hope will yield answers to the mystery of Aberdeenshire’s ‘oldest man’.

Believed to date from the fifth or sixth century, the Rhynie Man carries an axe upon his shoulder, has a large pointed nose and wears a headdress.

Dr Gordon Noble, a Senior Lecturer in archaeology at the University of Aberdeen, said their excavations would focus on the area around where the Rhynie Man was first found by local farmer Kevin Alston at Barflat and around the Craw Stane, another Pictish standing stone.

He said: “We did significant work at Rhynie in 2011/12 and identified that the area was a high-status and possibly even royal Pictish site.

“We found many long distance connections such as pottery from the Mediterranean, glass from France and Anglo-Saxon metal work with evidence to suggest that intricate metalwork was produced on site.

“Over the years many theories have been put forward about the Rhynie Man. However, we don’t have a huge amount of archaeology to back any of these up so we want to explore the area in which he was found in much greater detail to yield clues about how and why he was created, and what the carved imagery might mean.”

Excavations were continued throughout the previous week and two public open days were organized (August 22 and 29), in order for the archaeology team to showcase previous finds at Rhynie and some of their initial thoughts on the dig.

Dr Noble added: “From the evidence we have already, it looks like the Rhynie man stood somewhere near the entrance to the fort.

“We want to try and identify exactly where he was standing as this will give us a better idea how he fits into the high status site and what his role may have been.

“The Rhynie Man carries an axe of a form that has been linked to animal sacrifice and we hope to discover more evidence that might support the theory that he was created as part of ceremonies and rituals for high-status events, perhaps even those for early Pictish royal lineages.

“This may also help us to better understand the imagery used and why the Rhynie Man is depicted in this way. Standing at more than six-feet high the stone must have been an impressive sight to anyone coming to Rhynie some 1500 years ago.”

Aberdeenshire Council Archaeologist, Bruce Mann, said: “The ongoing work is not only helping us to reveal more about this little understood period of history, but is proving to be a fantastic opportunity for people to actively learn about part of the rich history of Aberdeenshire.

“One day we will understand not only ‘who’ the Rhynie Man was, but also what part the Picts played in the early development of the village. It’s a very exciting time for the community, and I hope everyone enjoys visiting both the dig and the local area.”