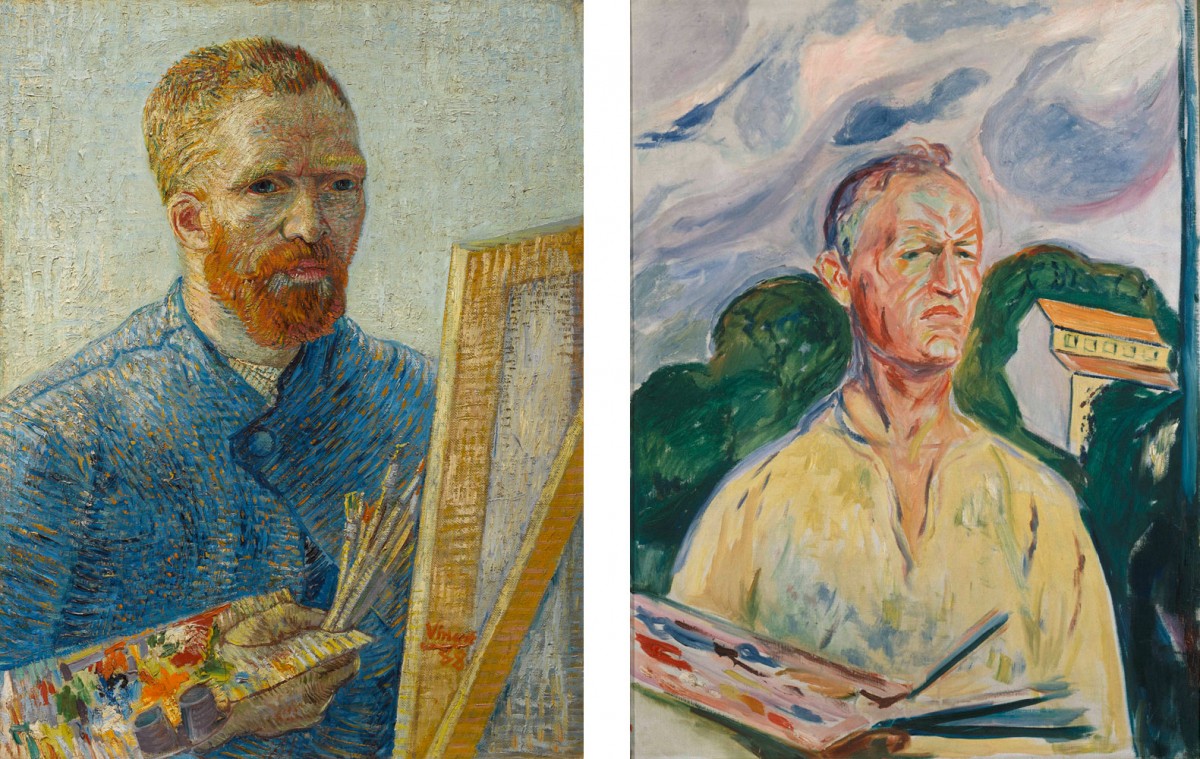 Tomorrow, Friday, 25 September, the long-awaited major exhibition Munch : Van Gogh that brings together work by Vincent van Gogh and Edvard Munch for the first time in history opens in the Van Gogh Museum in Amsterdam. The exhibition focuses on the common ground between the work of these two artists, which even today is still a source of inspiration to millions of people.

Munch : Van Gogh is a unique exhibition, featuring more than 100 works of art: approximately 80 paintings and 30 works on paper. This is the very first exhibition to be held in the museum’s reopened exhibition wing, and includes iconic pictures from all around the world that are rarely loaned out, such as Munch’s The Scream and Van Gogh’s Starry Night over the Rhone. Inspired by Munch : Van Gogh, ten prominent cultural institutes from Amsterdam (including EYE, Toneelgroep Amsterdam, the Royal Concertgebouw Orchestra and the Netherlands Philharmonic Orchestra) will roll out a cultural programme across the capital this autumn.

‘Where can I find The Scream?’ is a question often heard in the Van Gogh Museum. It is an understandable mistake. The names of the Norwegian Edvard Munch (1863-1944) and the Dutchman Vincent van Gogh (1853-1890) have been uttered in the same breath for more than a hundred years. Although they never actually met, they worked on very similar themes during the same period, and their take on life and art was very similar. Munch : Van Gogh is the first exhibition in history to focus specifically on the artistic affinity between these two kindred spirits. Featuring more than a hundred important works of art, including a number of top works that are very rarely allowed out on loan (The Scream, The Sick Child and Madonna by Munch; Starry Night over the Rhône, Patience Escalier (‘The Peasant’) and The Trinquetaille Bridge by Van Gogh). Munch : Van Gogh offers visitors a unique opportunity to admire key pieces from the collected works of these two artists in one location. Munch : Van Gogh is the result of years of collaboration and intensive research by the Van Gogh Museum in Amsterdam and the Munch Museum in Oslo.

Although Munch was ten years younger than Van Gogh, their careers began at almost the same time in 1880. They were both initially inspired by naturalist painters in their native countries, who painted sentimental subjects in subdued colours. But it was not long before the two artists started to approach traditional themes in their own very personal style. The Munch : Van Gogh exhibition starts with these early years, where the raw basic honesty of this phase is illustrated by The Potato Eaters (Van Gogh) and Morning (Munch). However, at the time these works were met with hostility and both men soon realised that they would be unable to develop their talents on their home ground. They moved to Paris within a couple of years of each other. This was the place to be in those days. It was the hub of everything that was new and modern, a meeting place for the avant-garde, where new movements such as impressionism and pointillism thrived. Munch and Van Gogh eagerly experimented with new styles, producing works of art that were entirely unique. Their mission was to bring about a radical modernisation of art, averse to all forms of convention.

Both devoted their artistry to the kind of existential questions we all ask, but to which nobody knows the answer. The hard, elusive and beautiful aspects of the strong emotions that govern human existence were the key: the cycle of birth and death, fear, human suffering, solace, hope and love. These are the themes of their most important works, such as The Starry Night, The Scream, The Sick Child and Madonna by Munch or Augustine Roulin (La Berceuse), Wheatfield under Thunderclouds and Garden of the Asylum by Van Gogh: the expression of hope in a single star or suffering in a broken branch.

To emphasise the feeling or idea behind their work, Munch and Van Gogh pushed their art to the limits. The colours virtually splash out of the canvas, accentuating the shapes and lines, and simplifying reality. Searching for new perspectives and excisions, they emphasised their use of paints and other materials, going against the grain, representing the pinnacle of all that was modern and unconventional. Despite their complex techniques, the finished work was often surprisingly simple. Their art is both accessible and highly complex; profoundly human: it touches the mind and the soul. This is precisely what makes Munch and Van Gogh so unique.

The combination of innovative techniques and universal themes resulted in compelling images that still manage to strike a chord in our hearts. In The Yellow House (‘The Street’), Van Gogh makes use of sharply contrasting colours to depict the searing heat in the South of France; in Death in the Sickroom, Munch distorts the perspective and feeling of space to create a claustrophobic atmosphere. Both Van Gogh and Munch wrote countless letters, diary entries and literary texts chronicling the trials and tribulations of life. The exhibition includes prime examples of these writings, such as Munch’s illustrated text about The Scream.

Although paintings like Van Gogh’s Sunflowers or Munch’s Vampire are best known as individual works of art, both were in fact originally intended as part of a series. Both artists hoped that these series of paintings would complement and clarify each other, forming a cohesive entity (both referred to them as ‘symphonies’). Munch’s most famous series of paintings is his Frieze of Life, a series that he spent many years developing and which depicts human life from the cradle to the grave. In Arles, in the South of France, Van Gogh painted his ultimate series of paintings, which he called the Décoration for the Yellow House. This series, which consists of pictures of towns and landscapes, portraits and still lives, was intended to adorn the rooms of his house in preparation for the arrival of his friend, Paul Gauguin (1848-1903). The last room of the Munch : Van Gogh exhibition displays the main works from both Munch’s Frieze of Life and Van Gogh’s Décoration. It is the grand finale of an artistic dialogue between two kindred spirits.

Munch : Van Gogh is a unique exhibition, featuring more than 100 works of art: approximately 80 paintings and 30 works on paper. Almost 80 works of art are on loan, including Portrait of Patience (‘The Peasant’), 1888 (private collection), Undergrowth with Two Figures, 1890 (Cincinnati Art Museum), Starry Night over the Rhône, 1888 (Musée d’Orsay) by Van Gogh; and Morning, 1884 (KODE Bergen Art Museum, Rasmus Meyer Collection), Fertility, 1899-1900 (Canica Art Collection, Oslo), Self-portrait with Pallet, 1926 (private collection), Madonna, 1895-1897 (private collection), The Sick Child, 1896 (Gothenburg Art Museum) and The Scream, 1893 (Munch Museum). This is the first time that these paintings by Munch have been on display in the Netherlands. A few paintings by Vincent van Gogh will also be exhibited in the Van Gogh Museum for the first time: Entrance to the Public Park in Arles, 1888 (Phillips Collection, Washington DC), Undergrowth with Two Figures, 1890 (Cincinnati Art Museum) and The Trinquetaille Bridge, 1888 (private collection).

Munch and Van Gogh both focused on the strong emotions that govern human existence: love, fear, spirituality and death. In the stairwell of the exhibition wing, the museum invites visitors to follow in the footsteps of Munch and Van Gogh by sharing their own ideas about these strong emotions. Quotes from both artists adorn the walls, inspiring visitors to write their stories on special plaques in the stairwell.

Cultural programme across Amsterdam Inspired by Munch : Van Gogh, ten prominent cultural institutes in Amsterdam (EYE, Toneelgroep Amsterdam, the Veem Theatre, the Royal Concertgebouw Orchestra, Het Dolhuys, De Balie, De Appel, SLAA, the Netherlands Philharmonic Orchestra and the Van Gogh Museum) will this autumn present a cultural programme based on the legacy of Munch and Van Gogh. Using film, performance, debate and music, these institutes will demonstrate the impact that the two artists still have on art and culture today. The Royal Concertgebouw Orchestra, for example, will perform concerts on the theme of Fear, and EYE will show short films made by up-and-coming filmmakers in reaction to The Scream. The popular Friday Nights in the Van Gogh Museum form the innovative epicentre of the cultural programme.