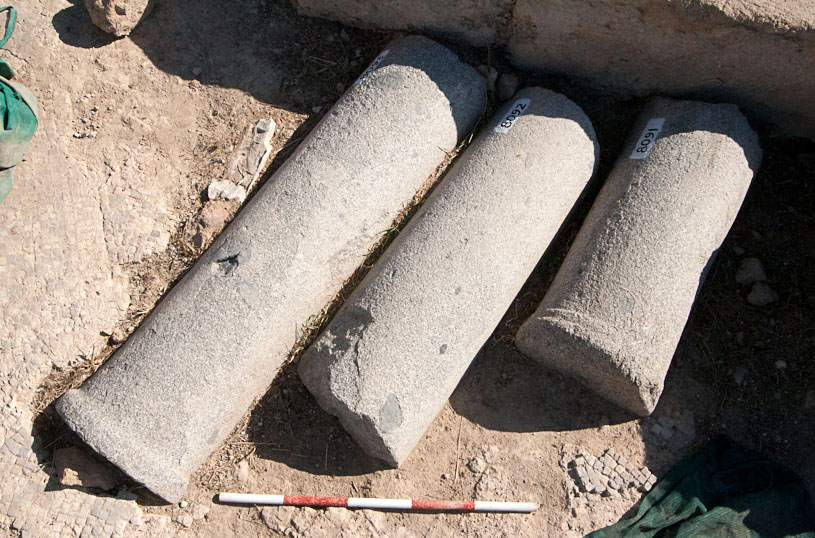 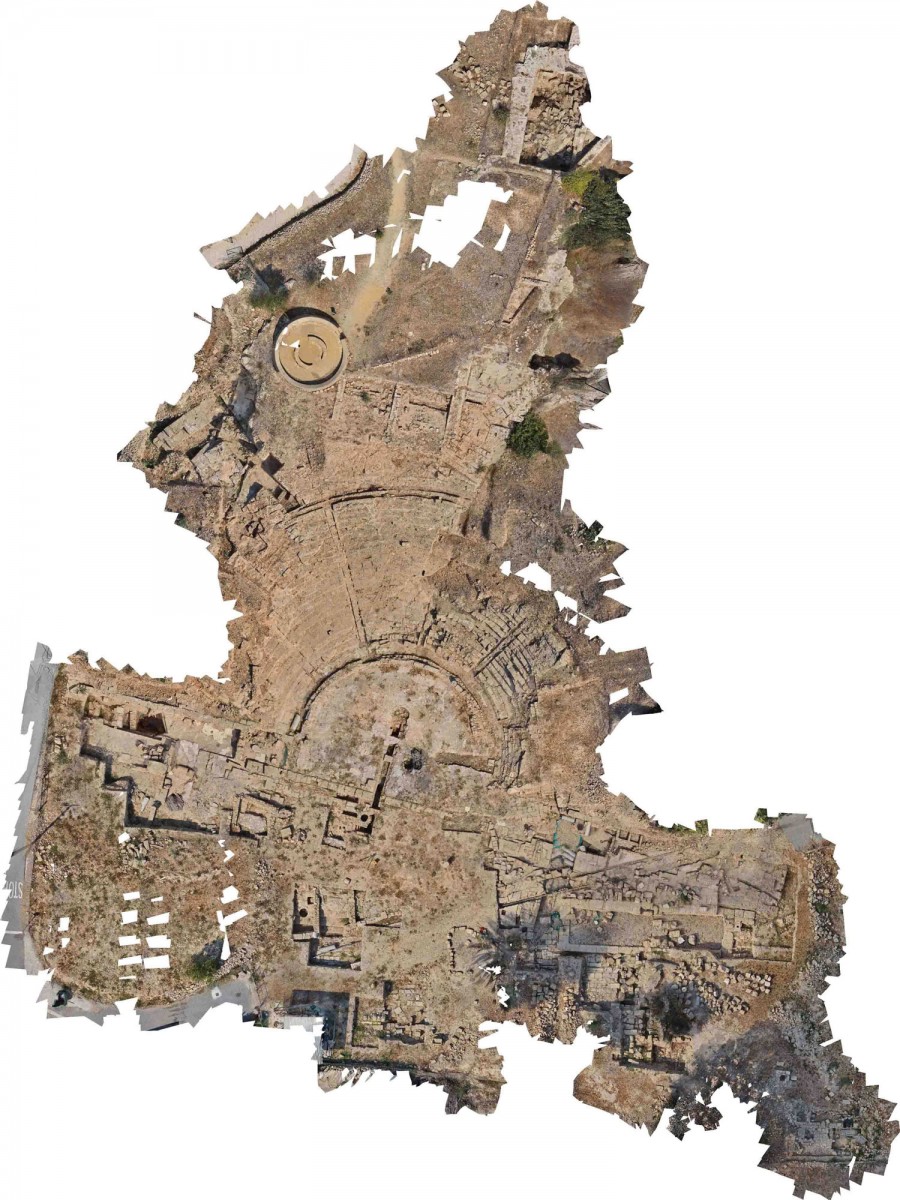 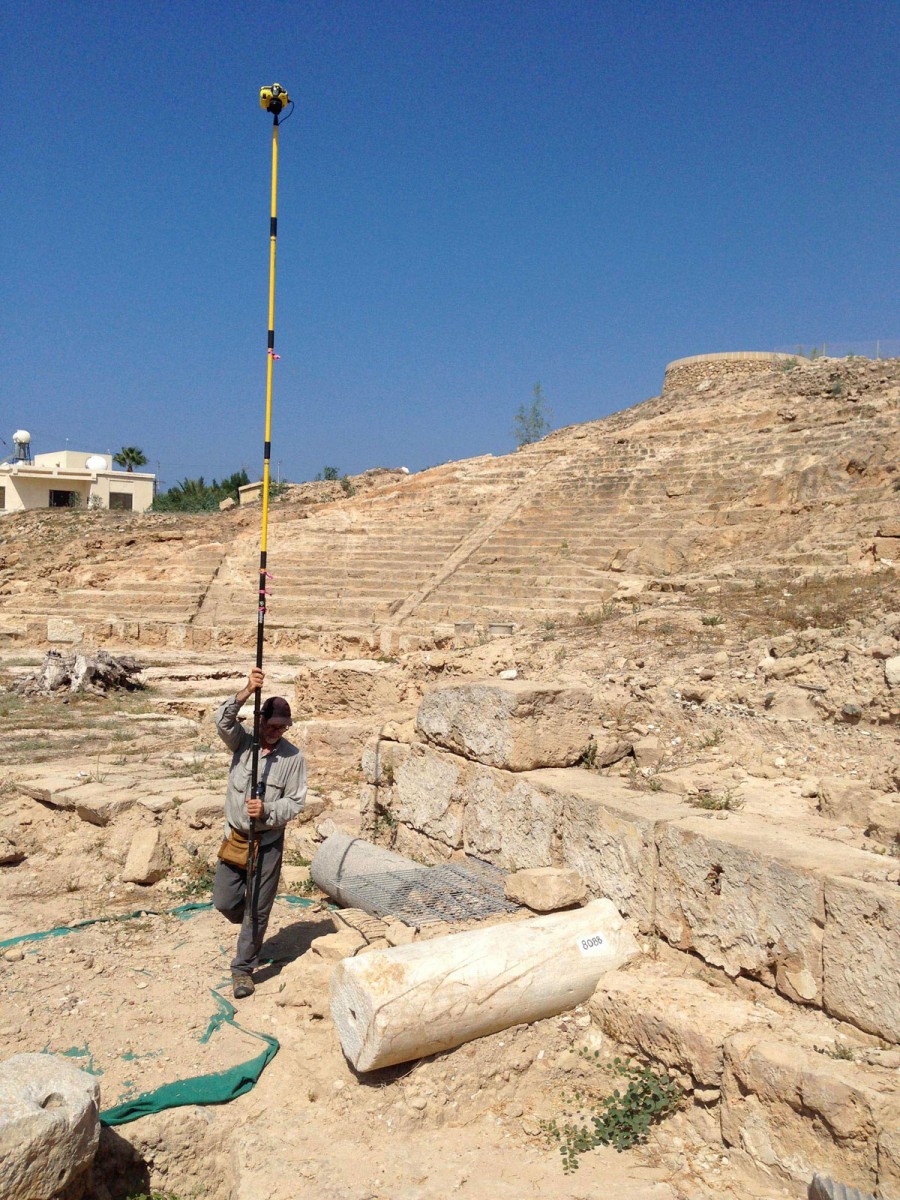 Positioning the Nea Pafos theatre within its ancient urban context

During recent excavations at the site of the Hellenistic-Roman theatre of Nea Pafos by the Australian Archaeological Mission from the University of Sydney, the team attempted to position the theatre within its ancient urban context, by understanding the surrounding ancient structures including a 2nd century AD nymphaeum (water fountain).

Excavations immediately to the south of the theatre by the Australian Mission revealed a Roman paved road, approximately 8.40 metres wide, which was the main traffic thoroughfare to access the theatre and the nymphaeum. The team speculates that this road near the theatre represented a major internal thoroughfare for the Roman Nea Pafos, leading to the nearby unexcavated North-East city gate. The existence of this road also confirms that ancient Nea Pafos was laid out on a typical Hellenistic grid plan. The discovery of numerous fragments of granite columns on the theatre site (over thirty to date) confirms the importance of the paved road. It is suggested that the columns were specifically imported for the construction of colonnades along the main Roman roads of the city.

The columns are made from granite from quarries in Troad in Turkey and reflect Roman trade in monumental architectural elements. Troad granite columns are known from colonnades across the Mediterranean. As the capital city of Cyprus at the time, it is not surprising that Nea Pafos would be adorned with this architectural demonstration of Roman civic order.

The survey of the visually identifiable surface granite column fragments of Nea Pafos located some 167 individual column fragments; all in secondary or subsequent usage. Many were reused in the construction of later buildings such as Saranda Kolones and the Early Christian basilica at Chrysopolitissa. Others have been incorporated into modern walls, fences, fountains and gardens. The team recorded each column fragment in detail; and its precise position was recorded using Total Station and survey grade GPS. Using the gathered data, each column has been plotted onto maps, which indicate that there are two distinct axes on which the majority of column fragments align. Those that don’t align were moved for a specific purpose, such as for the construction of Saranda Kolones.

It can now be suggested that a colonnaded road ran from the harbour of Pafos along a north-south axis, and that the paved road at the theatre was likewise colonnaded and represented the major east-west thoroughfare of Roman Nea Pafos running from the ancient city gate across to the archaeological park.

It is hoped that future targeted excavation of the road south of the theatre may reveal more of the granite columns, hopefully in situ, which will give an indication as to the spacing of the colonnade. The survey of Troad granite columns has revealed that those used in Nea Pafos fall into three main categories of size; a smaller series found mainly at the theatre, a middle type with a height equivalent to 16 Roman feet (around 4.6 metres) and the largest, but least common, type that stood at 24 Roman feet (over 7 metres).

Although this survey has provided an overall impression of the location of the colonnades, many questions still remain such as the appearance of the street façade and the date that the colonnades were erected, although it seems likely to have been in the 2nd century AD.

The Australian team has been excavating at the UNESCO World Heritage for two decades. In September 2015 the team conducted a geo-mapping survey of the ruins of the town’s Roman colonnades.