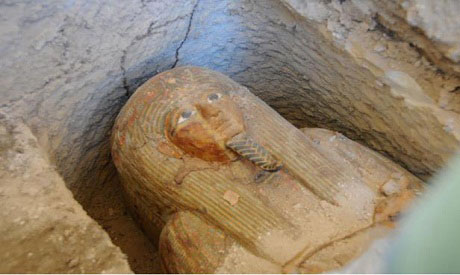 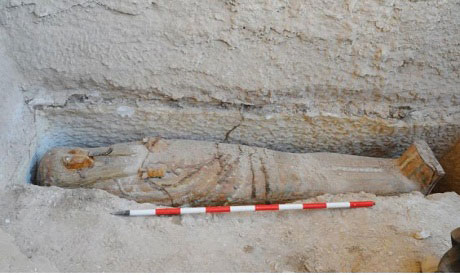 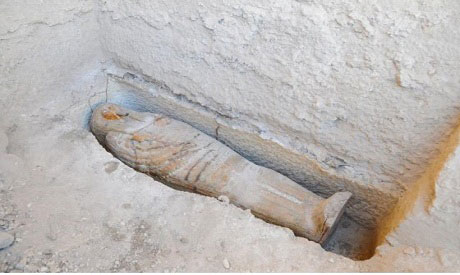 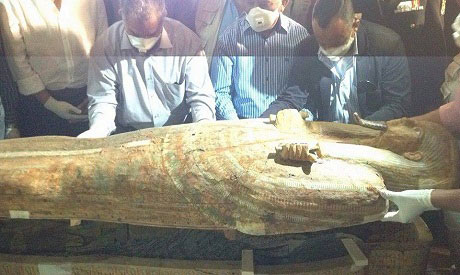 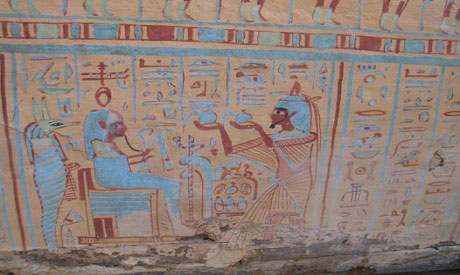 Of a nobleman from the 22nd dynasty

A sarcophagus of a 22nd dynasty nobleman has been unearthed around the tomb of Amenhotep in El-Assassif necropolis on Luxor’s west Bank. Egypt’s Minister of Antiquities Mamdouh Eldamaty announced the discovery. The nobleman was named Ankh-If-Khonsu, and the sarcophagus is very well preserved.

The sarcophagus was found at a niche carved in the tomb’s rock earlier this week by a Spanish mission from the Institute of Ancient Egyptian studies working jointly with an Egyptian mission from the ministry of antiquities. According to Mahmoud Afifi, Head of the Ancient Egyptian Antiquities department, the sarcophagus is carved from wood covered in a layer of plaster, a technique typical of the 22nd dynasty. The nobleman’s face is depicted on the sarcophagus, wearing a wig and a flower crown, while his chest is decorated with a necklace. The sarcophagus is painted to show him holding papyri flowers, and it is also decorated with hieroglyphic texts and scenes of the nobleman before Osiris, Nefertem, Anubis and Hathor.

The sarcophagus is said to contain a mummy, according to Sultan Eid, head of the central administration of Upper Egypt, but there have not been any relevant announcements so far.