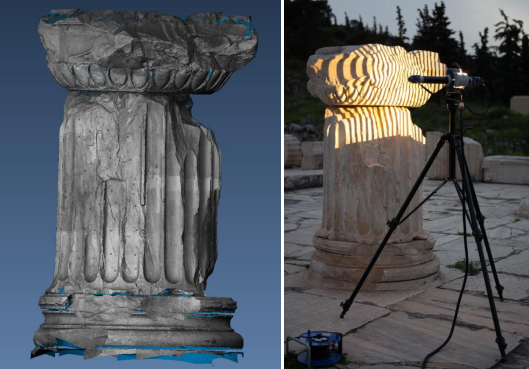 Developed by the EU-funded PRESIOUS project

Archaeologists will soon have access to new digital tools for reassembly and erosion, while advances in predictive scanning could open up new market opportunities.

The EU-funded PRESIOUS project has developed software tools that could help improve the efficiency of the work of European archaeologists at a time when funding is tight, and shown that computer simulation can play a key role in assisting researchers across a range of disciplines, including the preservation of cultural heritage artefacts. Once the project is completed, these tools will be made freely available for archaeologists to download, while the consortium’s industry partner has used some of the advances made.

‘We set out to address some of the challenges that archaeologists face in their everyday work,’ explains project coordinator Professor Theoharis Theoharis from the Norwegian University of Science and Technology.

‘In order to better understand what monuments will look like under certain erosive conditions for example, we built simulation software – within the timescale and resources available – that enables an archaeologist to scan a stone object and estimate erosion patterns under different conditions.’

A second aim was to develop simulation software to help archaeologists piece together fragmented findings, like solving a 3D puzzle. ‘During a dig, archaeologists will often come across thousands of fragments,’ says Theoharis. ‘Piecing these together involves quadratic complexity, which we computing scientists fully understand.’ The second tool developed by the project team automatically proposes possible fits based on the digitised fragments.

The third solution involved developing software capable of filling in gaps in archaeological objects with symmetry. Once fragments have been painstakingly reconstructed, final artefacts are often still missing pieces. The new software tool works by recognising symmetries and geometric patterns in the artefact, and from this information, offers logical suggestions to fill in the gaps, to aid restoration.

‘But in order to develop these technologies, we had to address a key bottleneck – the expense and labour intensive nature of digitisation,’ says Theoharis. ‘We found that it took a trained operator two and a half hours to scan just one fragment. So the fourth thing we did was speed up the digitisation process with our industrial partner.’

This was achieved through the development of predictive scanning, which uses predictions based on 3D object retrieval from repositories of previously digitised objects in order to speed up the scanning process. This technique is useful for applications where cost reductions are imperative and precision scanning is not necessarily the end goal, as is the case for some archaeological applications.

‘We did discuss the possibility of commercialising our software, but the academic project partners understood that our end users – archaeologists – work under harsh funding constraints,’ says Theoharis. ‘So these tools will go live free once the project ends (in January 2016). In addition, we have a great deal of data and research results that we intend to make available online. There were many related cultural heritage issues that we would have liked to tackle, so we hope that by making this information available, the research work will continue.’

Feedback from the archaeological community at various conferences, seminars and demonstrations has been very positive, and Theoharis is confident that the PRESIOUS tools will directly contribute to the preservation of European cultural heritage.