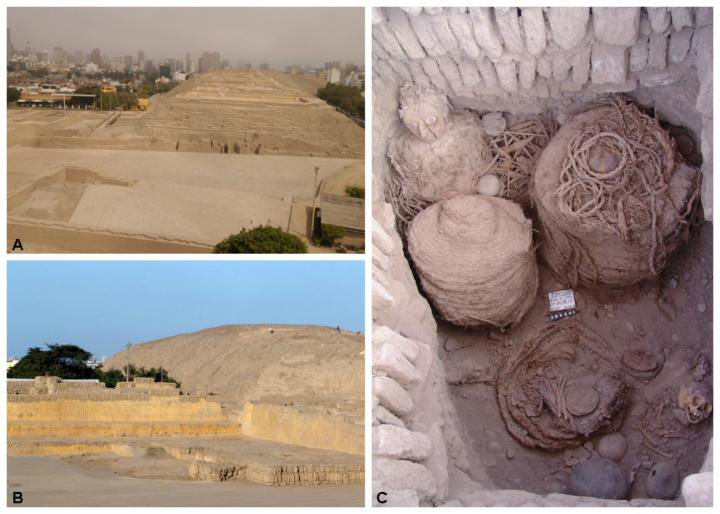 The imperial dominance of the ancient Wari Empire at the Huaca Pucllana site in Lima, Peru, was likely not achieved through population replacement, according to a study published June 1, 2016 in the open-access journal PLOS ONE by Guido Valverde from the University of Adelaide, Australia, and colleagues.

Successive pre-Columbian civilizations existed in the central Andes of South America since the pre-ceramic period 5.5 kya, and ancient empires such as the Wari Empire (600-1100 AD) may have been important in shaping the region’s demographic and cultural profiles. To investigate whether Wari dominance in the Peruvian Central Coast was based on population replacement or cultural diffusion, the authors of the present study sequenced the complete mitochondrial genomes of 34 individuals from the Huaca Pucllana archaeological site in Lima, Peru, who lived before, during, and after the Wari Empire, and assessed how the population’s genetic diversity changed over time.

The researchers found that genetic diversity may only have changed subtly over this period, indicating population continuity over time with only minor genetic impact from Wari imperialism. The subtle genetic diversity shift found at this site may not be representative for the entire Wari territory, and more research is needed to characterize the overall influence of the Wari Empire. Nonetheless, the authors suggest that the Wari Empire may have exerted influence in this area through cultural diffusion rather than by replacement of the pre-existing population.

Guido Valverde adds: “The Huaca Pucllana archaeological site in Peru’s Central Coast represents a unique transect of three successive cultures – Lima, Wari and Ychsma. The site provides the exceptional opportunity to study a 1000 years of pre-Inca history, including the impact of the Wari imperialist expansion on Peru’s Central Coast cities.”