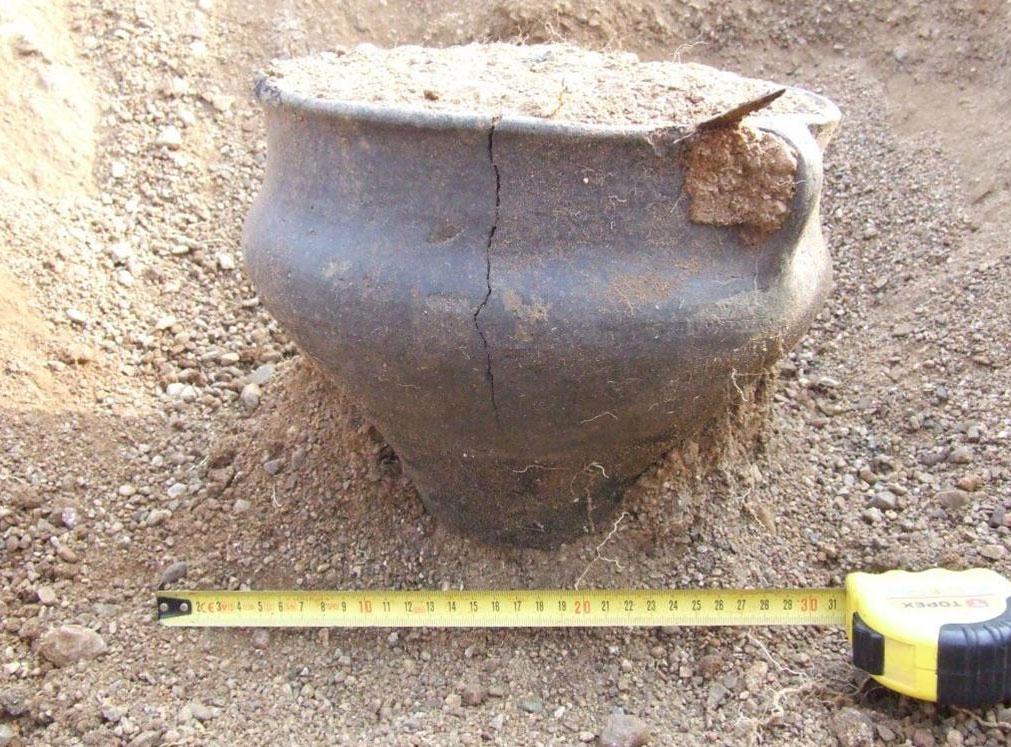 Discovery of a warrior tomb from the Roman period

Urn grave of a warrior with equipment from the Roman period has been discovered in Czelin (West Pomerania) by researchers from the National Museum in Szczecin. This is yet another collection of historical items found at the local cemetery of the poorly studied Lubusz group.

“One of the most interesting discoveries this year is the urn grave of a warrior from the Roman period,” told PAP on Monday Bartłomiej Rogalski from the National Museum in Szczecin, who led the recently completed archaeological research at the cemetery in Czelin.

“In a fully preserved urn, in addition to cremated human remains there was also a spearhead, a knife, a set of decorative bronze belt fittings with a buckle, fittings of two drinking horns for and a “Prussian Series” fibula, which dates the burial back to the early period of Roman influence,” said Rogalski. He added that archaeologists also discovered a destroyed grave containing a cutlass with and a scabbard.

“All graves without exception are crematory graves, which is typical for the cemetery in Czelin,” said Rogalski. “The other objects are mostly extensive paving stone patches located in the western periphery of the site. It was probably the place of rituals associated with the necropolis. The part of the cemetery studied this year can be dated to an older period of Roman influence, 1st-2nd century AD,” he added.

Over several years of research the cemetery has provided a total of 185 archaeological objects.

“The cemetery in Czelin is now the largest known necropolis from the Roman period on the lower Odra. In previous years archaeologists discovered there a rich and diverse set of artefacts, including imported objects of Roman and Scandinavian origin, and items associated with the influence of the Przeworsk culture of Wielkopolska and Germanic Elbe,” said Rogalski.

The vast majority of the monuments found in Czelin belongs to the so-called Lubusz group, which occupied from the first to the third century AD lower Nadodrze, Earth Wkrzańska, Pyrzyce and Myślibórz Lake District. The Lubusz group is poorly researched archaeologically and its characteristics still have to be clearly defined.

At the site in Czelin, in addition to the items from the Roman period, archaeologists earlier also found a grave with skeletal remains and ceramics, which should be associated with the Neolithic Corded Ware Culture. In 2013 they discovered finely made flint arrowhead dating back to the beginning of the 2nd thousand BC.

This year’s research in Czelin was conducted on behalf of the National Museum in Szczecin, with the support of the commune Mieszkowice. Students of archaeology from universities in Szczecin and Gdańsk participated in the project.