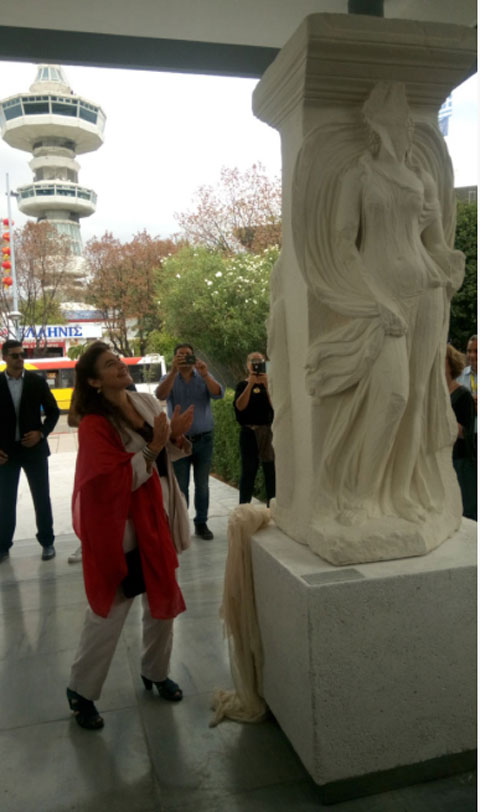 “Las Incantadas/ The Enchanted Ones”: Opening of the exhibition of their replicas

By the Ministry of Culture and Sports

On Saturday, September 9th 2017, the permanent exhibition “Las Incantadas/ The Enchanted Ones; A fairytale monument” was opened at the Archaeological Museum of Thessaloniki by Lydia Koniordou, Minister of Culture and Sports. In the portico of the Archaeological Museum of Thessaloniki, the city’s residents and its visitors will finally be able to admire the exact replicas of the Incantadas or Enchanted Ones, as these two sided pillars are commonly known, from the monument of the Portico of Idols, transported to the Louvre Museum in 1864 and returned to Thessaloniki as exact replicas in September 2015. The relinquishment of the moulds by the French “is a unique event”, as the Minister of Culture pointed out.

“All of you Thessalonians, either as individuals or as representatives of local agencies and services, pursued a dream; a struggle for the return of the Enchanted Ones. Faced with the impossibility of the authentic antiquities being returned, you became very resourceful and concentrated your efforts on constructing their exact replicas. As you very well know, this was an undertaking of equally titanic proportions, since the cost was astronomical particularly in these very difficult times. Thanks however to the constant support of the Municipality of Thessaloniki and other institutions such as the Archaeological Museum and the Ephorate of Antiquities, but above all, thanks to the generous funding of the Thessaloniki International Fair and the “adoption” of the pillars by the Thessaloniki Water Supply and Sewerage Company, the Thessaloniki Port Authority and the local Chambers of Commerce/Industry and Tradesmen, the collective dream of the return of a plundered monument, even the symbolic return of its replicas, came true” noted the Minister of Culture and Sports. And she concluded: “This is the happy end to the fairy tale of the Enchanted Ones or, I should say, the beginning of new fantastic voyages, meetings and narratives. It seems that we are still under their spell which, this time, takes us on a route full of hope, with collective responsibility and faith in a common vision as its starting point.”

Polyxeni Adam Veleni , Head of the Archaeological Museum of Thessaloniki described the opening ceremony as “joyous”, because the “reunion” of the Enchanted Ones has come true. “Since the end of the 19th century, they have had an adventurous life. We are hosting them in the Archaeological Museum in a long term ‘temporary’ exhibition, until they find their permanent place in the city.”

Inspection of the Ancient Theatre of Thasos

On Friday, Ms. Koniordou inspected the Ancient Theatre of Thasos. A serious amount of reconstruction work was achieved through the Ministry of Culture’s restoration programme of 2013-2015. “The inclusion of the Theatre of Thasos in the new NSRF funded by 3,500,000 Euros, will allow for the implementation of the approved studies and enable the reopening of this monument, which is directly linked to the Philippi-Thasos Festival and to the social, cultural and tourist life of the island,” stated the Minister. While there, Ms Koniordou attended the opening event of the 10th General Meeting of the “Diazoma” Association, at the Ancient Theatre of Thasos.