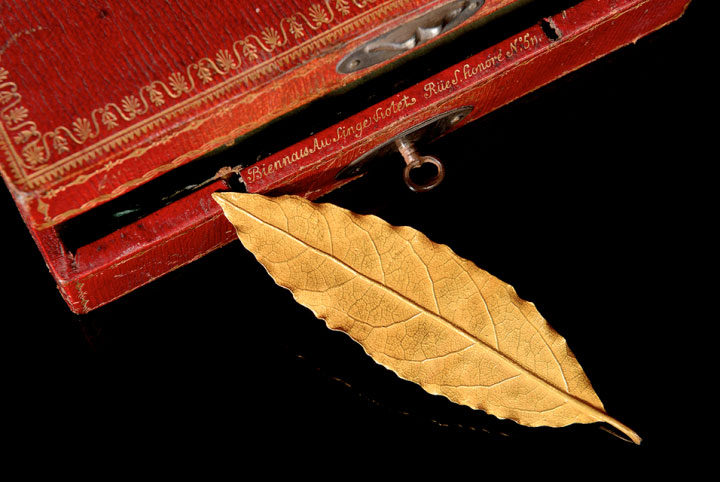 A gold laurel leaf intended for the crown used for Napoleon’s coronation in 1804 was sold for 625,000 Euros in an auction organized by Osenat auction house in Fontainebleau near Paris. This sum far exceeded the asking price that was expected to be between 100,000 -150,000 Euros.

The Osenat auction house said that this auction had prompted the interest of collectors not only from France but also from abroad.

To date, the exquisitely crafted leaf with its embossed veins had been kept by the descendants of the goldsmith who had made it.

The crown, depicted in the painting “The Coronation of Napoleon” by the Neoclassical painter Jacques Louis David, was judged to be too heavy for the monarch when he tried it on for the first time. The goldsmith Martin-Guillaume Biennais then removed six large leaves which he gave to his daughters. The leaf auctioned at Fontainebleau was the one belonging to the family.

Traces of the other five leaves have been lost. Another leaf cut from the crown in 1805 was sold in the 1980s for 80,000 francs and is now in the collection of the Fontainebleau National Museum.

About 400 articles associated with Napoleon were sold at the auction. Among them was a wooden box decorated with gold bees and flowers that had belonged to Josephine. Biennais had also made it and it was sold for 156,250 Euros, while the asking price had been between 40,000-50,000 Euros.