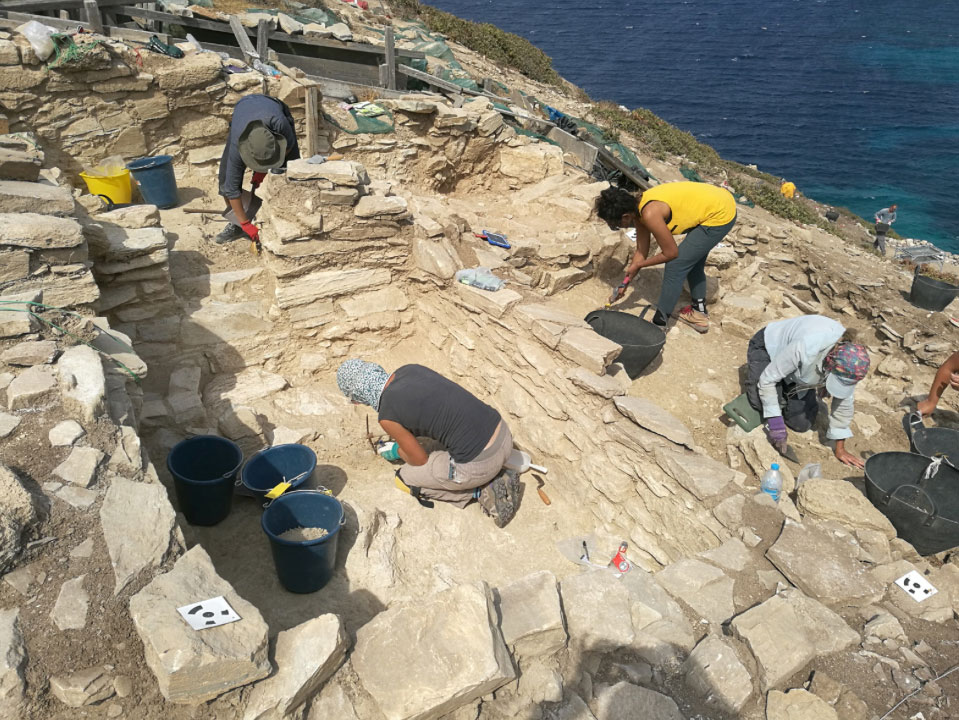 Michael Boyd talks about the finds at Dhaskalio

Interview with the Athens and Macedonian News Agency

The last few days, archaeological discoveries on Keros have been in the news. It is only natural, since impressive new finds have come to light on the Cycladic island, uninhabited today, known for its rituals 4,500 years ago whose main feature was the depositing of broken figurines.

The latest excavations in the prehistoric settlement of Dhaskalio on Keros unearthed “a large number of imposing structures built closely together, considerably more impressive than what we had thought to date, proving the site to be one of the most significant in the Early Bronze Age Aegean (3rd millennium BC)”. This is what was mentioned, among other things, in the announcement by the Ministry of Culture and Sports on the finds at Dhaskalio, Keros’ most western promontory, which is now a small island due to rising sea levels.

The Ministry of Culture and Sports also announced the following:

-Dhaskalio was almost entirely covered with unique monumental buildings, built of stone imported from Naxos, giving the impression of a single grand monument rising out of the sea.

-Under an impressive staircase that came to light on the lower terraces, a sophisticated drainage system was discovered, which suggests a multifunctional architecture carefully designed in advance.

-Another aspect of Dhaskalio’s development can be found in the use of new farming practices for cultivating the olive and grape, while metalworking, the most important technology of the 3rd millennium BC, also played an important role. The inhabitants of Dhaskalio were proficient metalworkers, as clearly shown by clues found all over the site.

On the occasion of the impressive discoveries on Keros, the Athens and Macedonian News Agency (AMNA) spoke with co-director of the excavations at Dhaskalio Dr Michael Boyd of Cambridge University.

“The latest excavations show the nature of habitation on the Dhaskalio promontory. After the initial activities in the sanctuary, as shown by the ‘special depositors’ (i.e. the deposits of broken marble figurines and vases found in the Kavos sanctuary on Keros dating from 2700 to 2400 BC), an extensive building programme took place at Dhaskalio, which changed the natural rocky outcrop into something that resembled a human construction” said Dr Boyd to the Athens and Macedonian News Agency, pointing out the complexity of the relations and activities that were developed: “Within the walls that were built, activities, knowledge and expertise evolved that have to do with rare or exotic materials such as metals and obsidian, while the people who lived there seem to have been involved in different networks operating at different levels. Dhaskalio became a proto-urban centre such as never seen before in the islands, competing only with Knossos on Crete.”

To what period however does this brilliant construction programme date? “At the moment it seems that construction at Dhaskalio starts a little after the ritual activities at Kavos, perhaps around 2600 BC” says Dr Boyd to the AMNA, noting however that “one of the primary aims of research the following summer will be to find evidence of earlier activity at Dhaskalio, consequently this answer might change.”

“How do you think things evolved on Keros? Why did you speak about the beginnings of urbanization?” the AMNA asks Dr Boyd: “At first, the ritual activities in the sanctuary were the focus on Keros. But this gradually led to the concentration of other types of activities, with increasing technical know-how and raw materials being centred at the west end of the island. The forms of interaction that inevitably took place among the people during the ceremonies ‘sowed’ the seeds for the strengthening or creation of new networks centred on Keros. This gathering of people and materials is the reason we refer to proto-urbanization,” he explains.

As to whether we have something comparable in other areas, he replies that “the most obvious parallel is Knossos on Crete, where similar influences occurred, at least after the end of the 4th millennium; i.e. the gathering of large groups for rituals and the concentration of people and resources.”

What about the continuation of the excavations? “2018 is our last year of research regarding the current programme. We shall further investigate Dhaskalio, so as to fully understand the functions and activities that took place in the buildings we discovered there. We shall also conduct a surface survey on Kato Koufonisi, most probably one the places that supplied food to Dhaskalio, in order to understand Bronze Age models for habitation and activity on the island” he concludes.