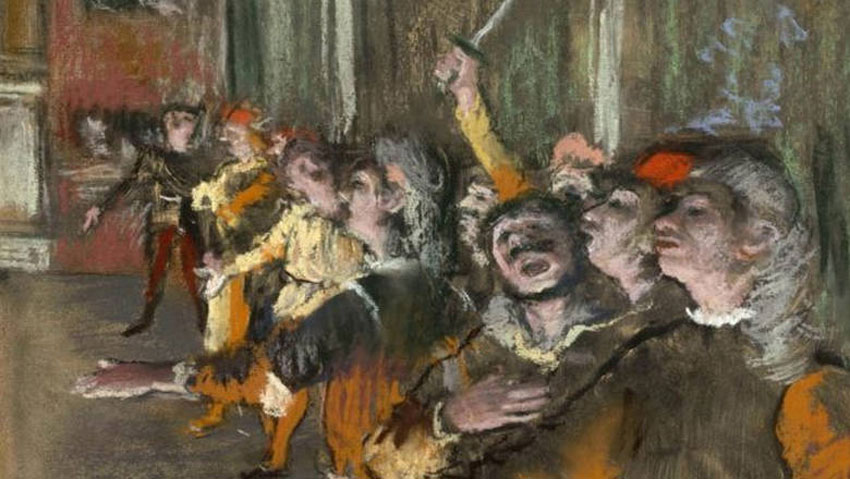 A stolen painting by Edgar Degas was found in Paris

It had been stolen in 2009 in Marseilles

It was announced by the ministries of Culture and Finance of France that French customs found a 19th century painting by Edgar Degas called “Les Choristes” that had been stolen at the end of 2009 in Marseilles, hidden in the baggage compartment of a bus in a Paris district.

The painting, which belonged to the Musee d’Orsay and was also known as “Les Figurants”, had been stolen from the Musee Cantini in Marseilles where it had been on loan for an exhibition, with no obvious signs of a break in being discovered.

On February 16, while an inspection was being conducted on a parked bus in a district east of Paris, customs discovered in a suitcase “a work bearing the signature ‘Degas’ claimed by none of the passengers” as both ministries said in a joint statement.

They confiscated the painting that was attributed to Degas, a French impressionist painter born in 1834 who died in 1917, and asked an expert opinion from the Musee d’Orsay. The statement by the two ministries clarifies that “the first facts of the expert opinion permit us to say that it is actually the work we were looking for.”

The minister of Culture Francoise Nyssen expressed her joy about “this happy discovery of a precious work that belongs to the national collections, whose disappearance was a heavy loss to the heritage of French Impressionism.”

Her counterpart, Gerard Darmanin, whose ministry is also in charge of customs, welcomed the “unceasing vigilance of customs in the fight against the smuggling of cultural goods and its commitment to the protection of cultural heritage.”

When it was stolen in 2009, the National Association of Museums had declared that the value of this pastel painting of 1877 measuring 32×27 cm was 800,000 Euros. For its part, the staff of the museum in Marseilles had estimated its value at 30 million Euros, but, regarding this issue, the prosecution office had made reference to there being “some confusion”.

In answer to a related question, the Musee d’Orsay explained that it does not intend to discuss these numbers: “They are insurance prices and cannot be disclosed”.