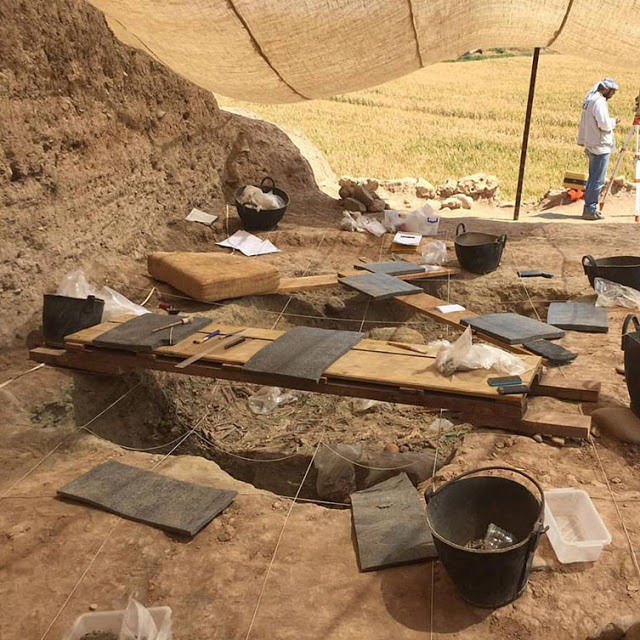 Remains of young people who were ritually sacrificed have been found from Bronze Age Mesopotamia.

Led by Museum scientific associate Dr Brenna Hassett, a team examined burial practices at Başur Höyük, a Bronze Age cemetery in Turkey. It contains a series of individuals who were buried between 3100 and 2800 BCE.

The site dates to 500 years before the famous Royal Cemetery of Ur, a luxurious series of tombs that form the resting place of Mesopotamian rulers.

An excavation of Başur Höyük uncovered a large, coffin-like stone tomb that contained multiple burials, with an unprecedented number of high-status grave goods for the period and region.

In three graves were found the remains of at least 11 people, male and female, ranging from age 11 to young adults.

Several people were buried outside the tomb with elaborate ornaments and grave goods.

“Women and children in Mesopotamia were occasionally buried with grave goods, but they were normally personal belongings.

“There are various pieces of evidence which suggest that these young people did not die accidentally or naturally – rather they were sacrificed.”

Human sacrifice in the ancient Near East

The ancient Near East was made up of the region that now includes modern-day Iraq, as well as parts of Turkey, Iran, Syria and Kuwait. Its history begins from about 4,000 BCE.

Much of this area formed Mesopotamia, a collection of cultures bonded by their writing systems and gods. It is often thought of as the cradle of Western civilisation.

Many early human societies like this one used human sacrifices as a tool as they got bigger and more complex.

Brenna says, “Previously, the most well-known example of human sacrifice from this area is the monumental discovery of the Royal Cemetery of Ur, where hundreds of burials were identified as sacrifices.

“It has been suggested that practicing human sacrifice was one of the ways that complex civilizations like the one that rose up in Mesopotamia consolidated their power.

“This discovery moves the investigation 500 years earlier and more than 500 miles to the north.”

How do we know this was human sacrifice?

Two children were buried lying in the tomb, with eight other young people buried at their feet. They appear to have been carefully positioned, and adorned with valuable goods and elaborate decoration in a deliberate display of social value.

Although researchers are unable to confirm exactly how these people died, at least two of the retainers from the outside of the tomb show evidence of sharp force trauma including stabbing and cutting wounds, suggesting unnatural deaths.

In particular, one of the young adult males suffered trauma to his hip and head, and seems to have suffered a violent end, perhaps being stabbed in the hip and skull by a sharp point. The head wounds are similar to the reconstructions of skull trauma seen in the sacrificial burials at the Royal Cemetery of Ur.

Brenna says, ‘It is unlikely that these children and young people were killed in a massacre or conflict. The careful positioning of the bodies and the evidence of violent death suggest that these burials fit the same pattern of human sacrifice seen at other sites in the region.

The burial has parallels with the elaborate burials from the Royal Cemetery of Ur.

Why were they sacrificed?

The burials show evidence of large political and social upheavals around this time, when early states were forming in southwest Asia.

Brenna says, ‘This exciting discovery will change the way we look at the development of the world’s first states.’Human sacrifice, the act of killing people for ritual purposes, is usually associated with hierarchical centralised societies.

It can be done to achieve various spiritual, political, martial or economic goals.

Because this period in Mesopotamia was a time of political upheaval, instability and crisis, Brenna thinks that sacrifices like this one were a way of controlling a city or state’s population.

In the northernmost region, in the valleys of the upper Tigris river, the evidence from Başur Höyük shows that people were developing new ways of demonstrating their power. This ranged from outrageous displays of wealth like depositing of a fortune in bronze goods in a burial, to the ultimate deposit of sacrificed human lives.

Başur Höyük sits on an important crossroads between metalworking cultures and the region known as Mesopotamia, often thought of as the cradle of western civilisation, inhabited by modern-day Iraq, as well as parts of Turkey, Iran, Syria and Kuwait.

In addition, excavations have revealed a further series of mysterious burials from the site, including a mass death pit containing at least fifty individuals buried simultaneously.

A new Arts and Humanities Research Council grant was awarded to Prof David Wengrow from UCL, Brenna, and the Museum’s team of ancient DNA experts, Prof Ian Barnes and Dr Selina Brace, to investigate the very beginnings of civilisation as we know it.