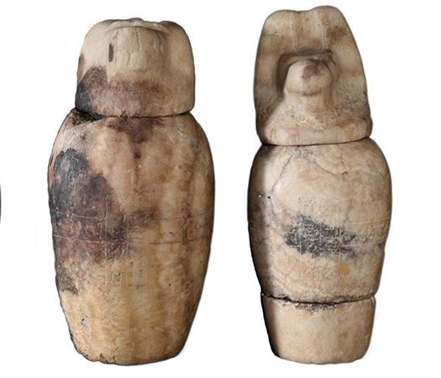 Set of canopic jars found in the tomb of Karabasken

By an Egyptian-American mission of the South Asasif Conservation Project

An Egyptian-American mission of the South Asasif Conservation Project succeeded to discover a collection of a well-preserved set of canopic jars in the tomb of Karabasken (TT 391), in the South Asasif Necropolis on the West Bank of Luxor, Dr. Mostafa Waziri, Secretary General of the Supreme Council of Antiquities announced.

He pointed out that the canopic jars were found in a nearly cubic cutting in the floor measuring approximately 0.60m by 0.60m and 0.50m deep in an intrusive burial compartment cut into the south wall of the pillared hall in the Kushite tomb of Karabasken (TT 391).

The jars had fallen over under the pressure of flood water and one of them was broken into several fragments. They underwent emergency cleaning and consolidation performed
by the MoA conservation team.

Dr. Fathy Yassin, Head of the Mission – Egyptian side explains that the discovery jars are made of Egyptian alabaster and hollow inside and probably held viscera. Although the contents of the jars were damaged by floodwater the jars still contained a large amount of resin. The sizes of the jars (with lids) vary from 35.5 to 39.4 cm. The lids, in the shapes of a human, baboon, jackal and a falcon are skillfully carved and modeled by at least three different artists.

On her part Dr. Elena Pischikova, Director of the South Asasif Conservation Project said that the jars are inscribed to the “Lady of the House Amenirdis”, of the 26th Dynasty. The inscription is arranged in two vertical columns and one horizontal line.

She added that the South Asasif Conservation Project is an Egyptian-American mission working under the auspices of the Ministry of Antiquities. The Project was founded in 2006 with the aim of restoring and reconstructing the damaged and artially collapsed Late Period tombs of the South Asasif necropolis, Karabasaken (TT 391), Karakhamun (TT 223) and Irtieru (TT 390).

During its 12 years of work  the Project found thousands of fragments of the  collapsed decoration of the tombs and reconstructed the Second Pillared hall and part of the First Pillared hall in the tomb of Karakhamun.

The restored tombs will feature sophisticated relief carving and painting of the 25th and 26th Dynasties.