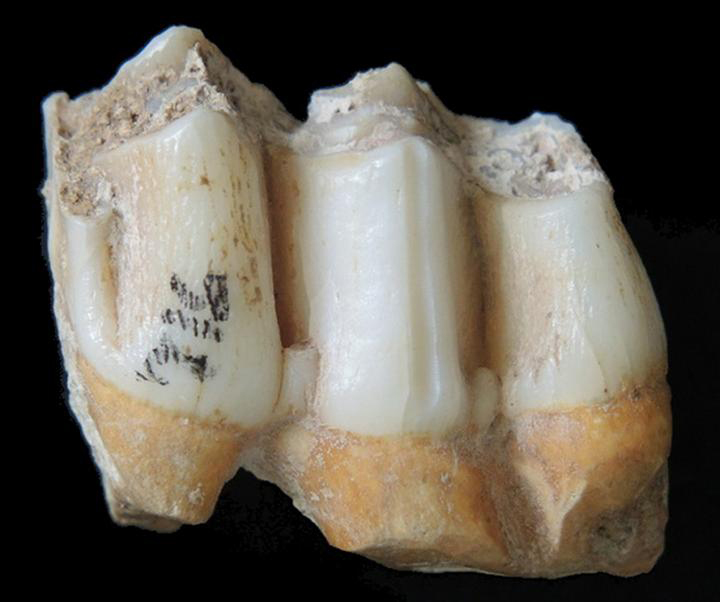 Reconstructing the diet of fossil vertebrates

Information on what our ancestors ate is based mainly on carbon and nitrogen isotope analyses of the structural protein collagen in bones and dentin. Nitrogen isotope analysis, in particular, helps scientists determine whether animal or plant food was consumed. Since collagen, like proteins in general, is not easily conservable, this method cannot be used to examine vertebrate fossils older than about 100,000 years. This timeframe is even often reduced to only a few thousand years in arid or humid tropical regions like Africa and Asia, which are considered key regions for human evolution and are therefore of particular interest to science. New methods—such as zinc isotope analysis—are now starting to open up new research perspectives.

The researchers analyzed the ratio of two different zinc isotopes in the dental enamel of fossil mammals that had only recently been discovered in a cave in Laos. These fossils date from the late Pleistocene, more precisely from around 13,500 to 38,400 years ago. In 2015, in the Tam Hay Marklot cave in northeastern Laos, scientists found fossils of various mammals, including water buffalos, rhinos, wild boars, deer, bears, orangutans and leopards. “The cave is located in a tropical region where organic materials such as collagen are generally poorly preserved. This makes it an ideal location for us to test whether we can determine the differences between herbivores and carnivores using zinc isotopes,” says study leader Thomas Tütken, professor at the JGU’s Institute of Geosciences.

Zinc is ingested with food and stored as an essential trace element in the bioapatite, the mineral phase of tooth enamel. Thus, zinc has a better chance of being retained over longer periods of time than the collagen-bound nitrogen. The relevant ratio is derived from the ratio of zinc 66 to zinc 64: “On the basis of this ratio we can tell which animals are herbivores, carnivores or omnivores. This means that among the fossils we analyze, we can identify and clearly distinguish between carnivores and herbivores, while omnivores are expected to be in between,” says Nicolas Bourgon first author of the study from the Max Planck Institute for Evolutionary Anthropology and PhD student in Tütken’s research group. Lean meat contains more zinc-64 than plant food does. Carnivores, like the tiger, will have a smaller ratio of zinc-66 to zinc-64, as compared to herbivores, like the water buffalo.

In order to exclude alteration from external sources on the samples, the fossils were also examined by the team of Klaus Peter Jochum at the Max Planck Institute for Chemistry. No changes were found when comparing the concentration and distribution of zinc and other trace elements of fossil tooth enamel with those of modern animals using laser ablation ICP mass spectrometry.

Time horizon to be extended to over 100,000-year-old fossils

The zinc isotope method has now—for the first time—been successfully applied to fossils. “The zinc isotope ratios in fossil enamel from the Tam Hay Marklot cave suggest an excellent long-term conservation potential in enamel, even under tropical conditions,” summarize the authors. Zinc isotopes could thus serve as a new tool to study the diet of fossil humans and other mammals. This would open a door to the study of prehistoric and geological periods well over 100,000 years ago. In the future, the next goals are to apply this method to reconstruct human dietary behaviours. The researchers also want to find out how far back in time back in time they can go, by applying their new method to fossils of extinct mammals and dinosaurs that are millions of years old.