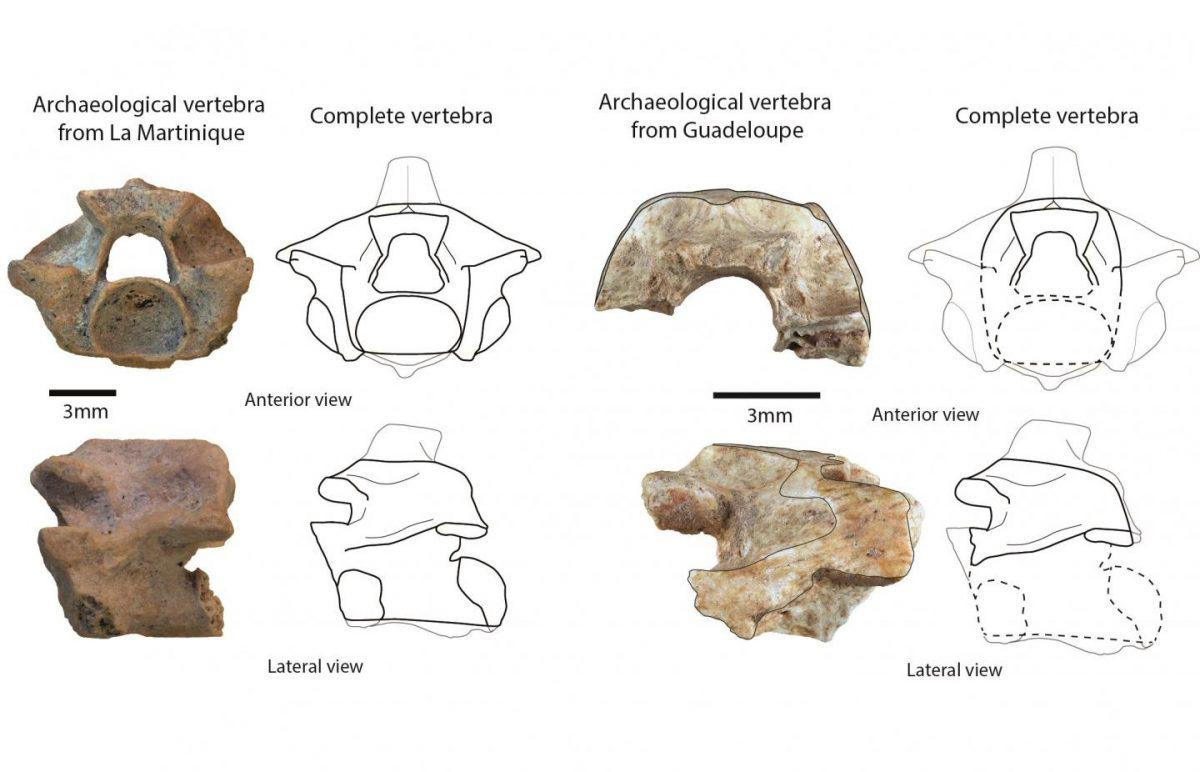 A new study of 8 archaeological Boa finds on the islands of the Lesser Antilles has been conducted to provide insights into the relationship between Amerindian groups and Boa before Western colonization.

Today Boa snakes have a patchy distribution in the islands that form the Lesser Antilles in the Caribbean Sea, but the constrictors are nearly absent from archaeological deposits in the region. Whether this scarcity is due to past species distribution, poor preservation conditions, or a lack of interaction with human communities, remains unknown.

To find out why boas occur sparsely in the Lesser Antilles today but hardly at all in archaeological contexts, Corentin Bochaton of the Max Planck Institute for the Science of Human History and the University of Bordeaux, conducted a multidisciplinary study combining archaeological evidence with historical and biological data sources.

Boas had a special status in pre-Columbian Lesser Antilles

Despite the presence of many other snake species in the archeological assemblages of the Lesser Antilles, these Boa remains are the only snake bones that appear to have been made into beads, an important clue as to their cultural significance. “The extreme scarcity of Boa in zooarchaeological assemblages, combined with the fact that these are the only snake bones to be modified, reflects the prominent status Boa had in Pre-Columbian Amerindian communities,” says Bochaton.

The fact that Boa are largely absent from archaeological finds suggests they probably weren’t hunted or eaten by human populations, at least not near their settlements, and evidence from historical records further points to an elevated status of Boa snakes. A chronicle of a 17th century voyage to the Caribbean in a document known as Carpentras Anonymous describes the indigenous people of the islands as unwilling to kill Boas, believing the harm they did to the snakes would also be done to their grandchildren.

Further, an account by Charles de Rochefort (1658) retells a story told by the people of Dominica of a monstrous snake who carried on its head a stone of great worth that would glow when it drank or moved in the abyss.

“These documents show us that Boa snakes had, among all snakes, a special status and were especially feared and respected, which could help explain their scarcity in archaeological deposits,” says Bochaton.

Multiple lines of evidence help to reconstruct lost past

The islands of the Lesser Antilles were first colonized by Amerindian groups between 7,000 and 5,500 years ago, but molecular evidence and the presence of Boa in fossil deposits show that the snakes colonized these islands thousands, if not millions of years before. Approximately 2,500 years ago, ceramic producing cultures arrived and evolved until the first European contact. At this point a ceramic style known as Cayo emerges.

Western colonization in the 17th century almost completely depopulated the Lesser Antilles of Amerindians and wiped out indigenous cultural practices. It also brought about the extinctions of a long list of species, ranging from terrestrial and flying mammals to birds and scaled reptiles – a list this paper shows to remain incomplete.

“Because of their absence in the archaeological record, Boa snakes were presumed absent from Guadeloupe,” Bochaton explains. “These remains not only show that Boas were here, they remind us how much of the cultural and natural history of these islands has been lost, and how important it is to use different lines of evidence to discover and interpret the past.”