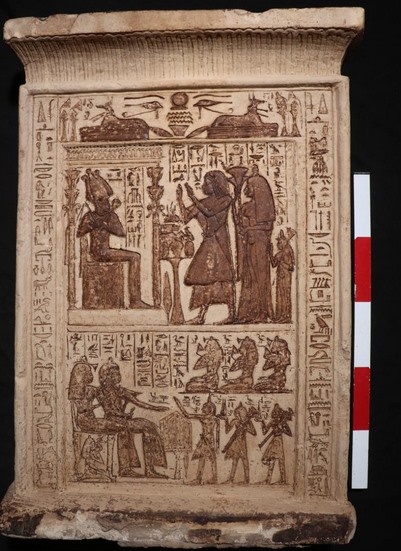 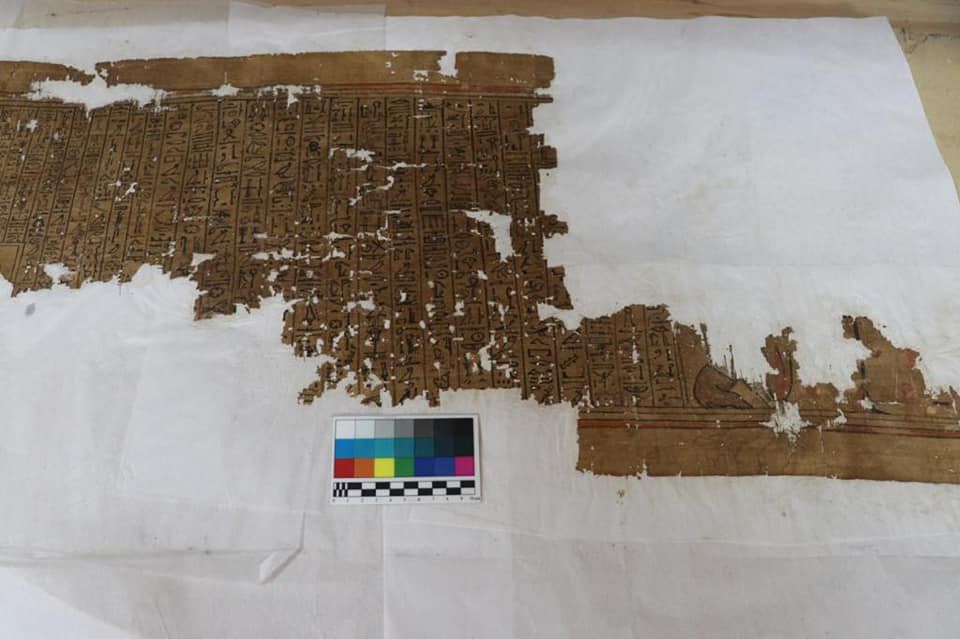 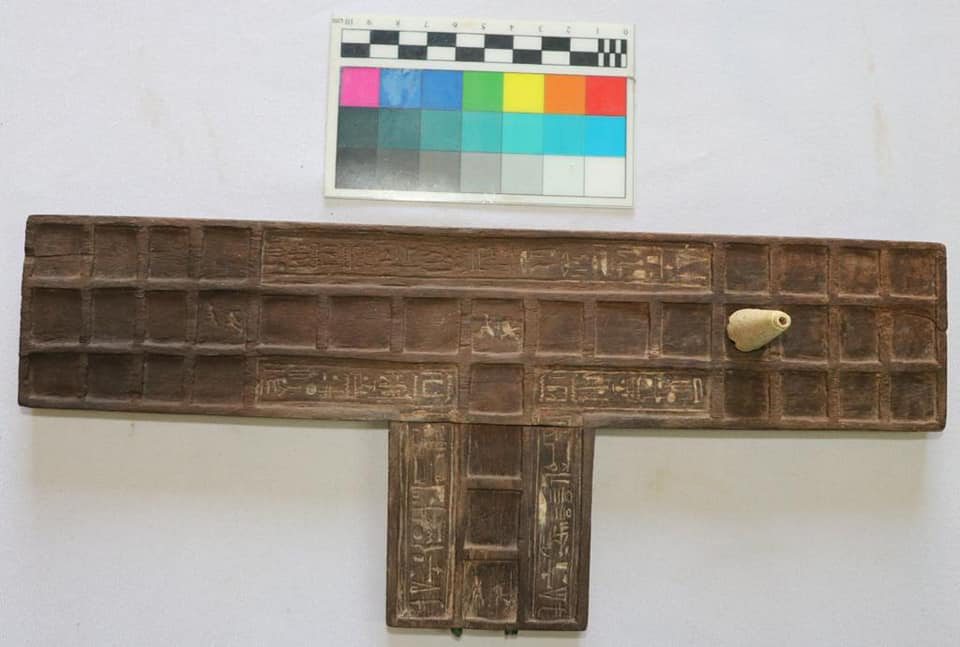 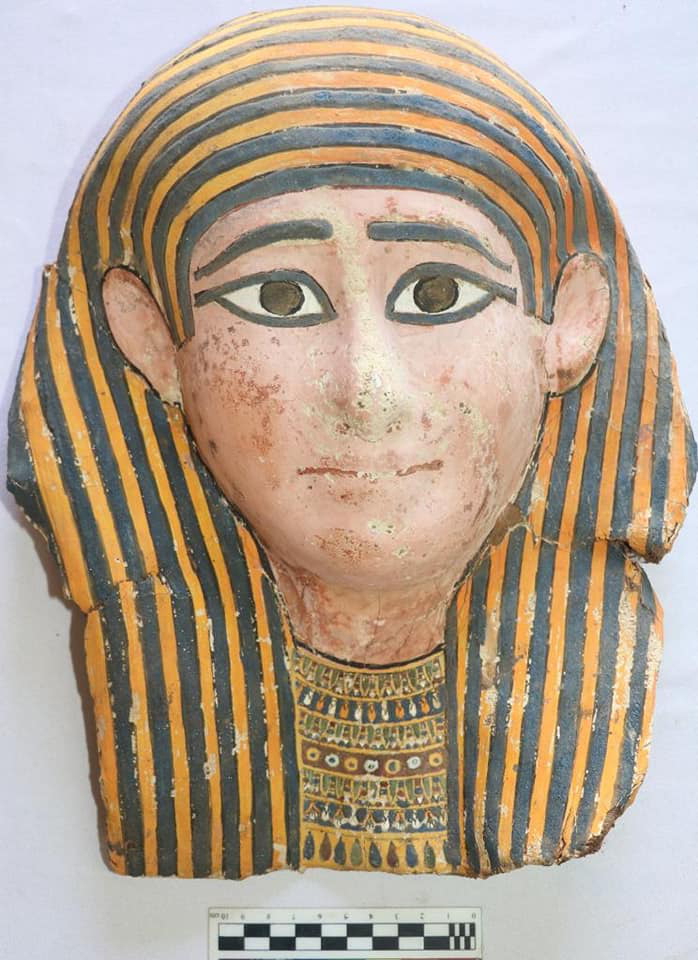 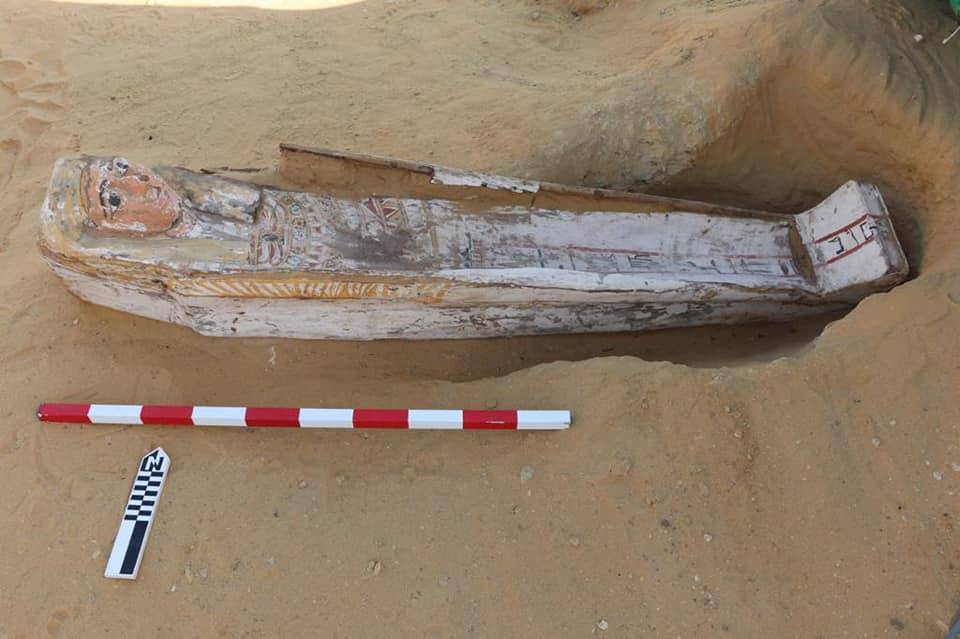 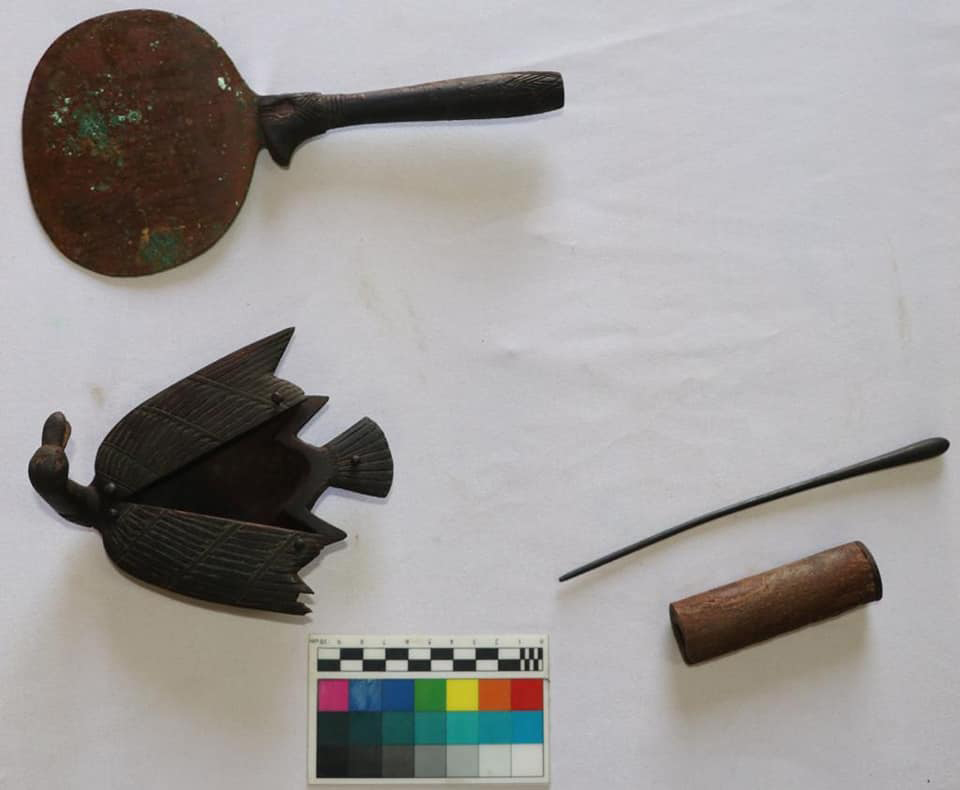 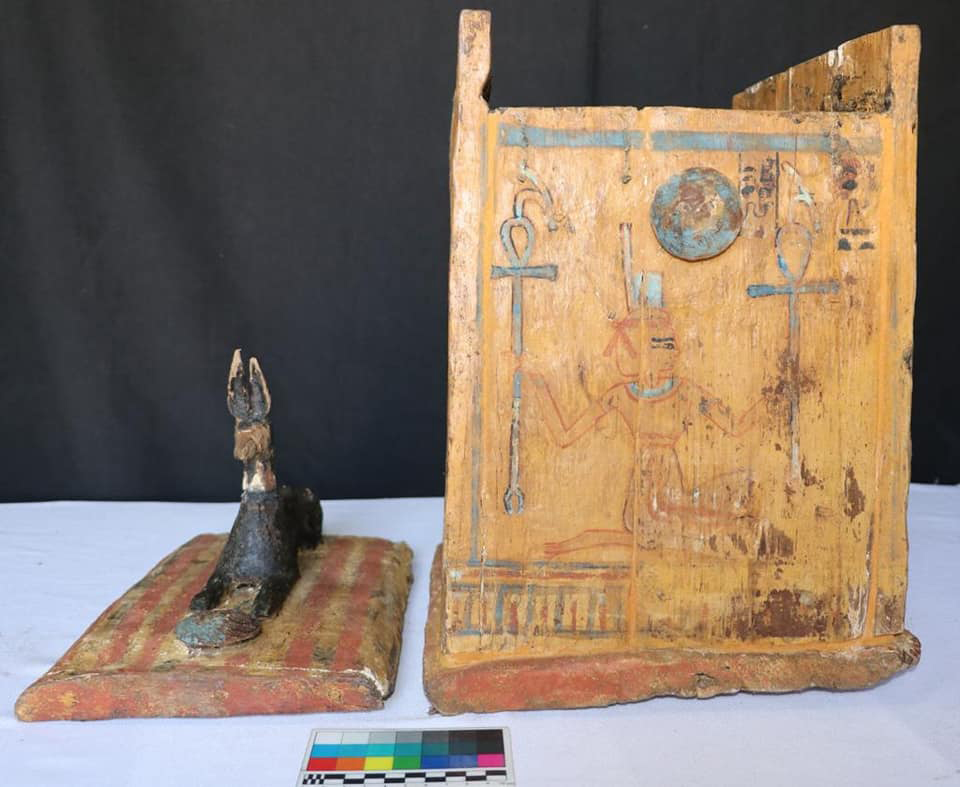 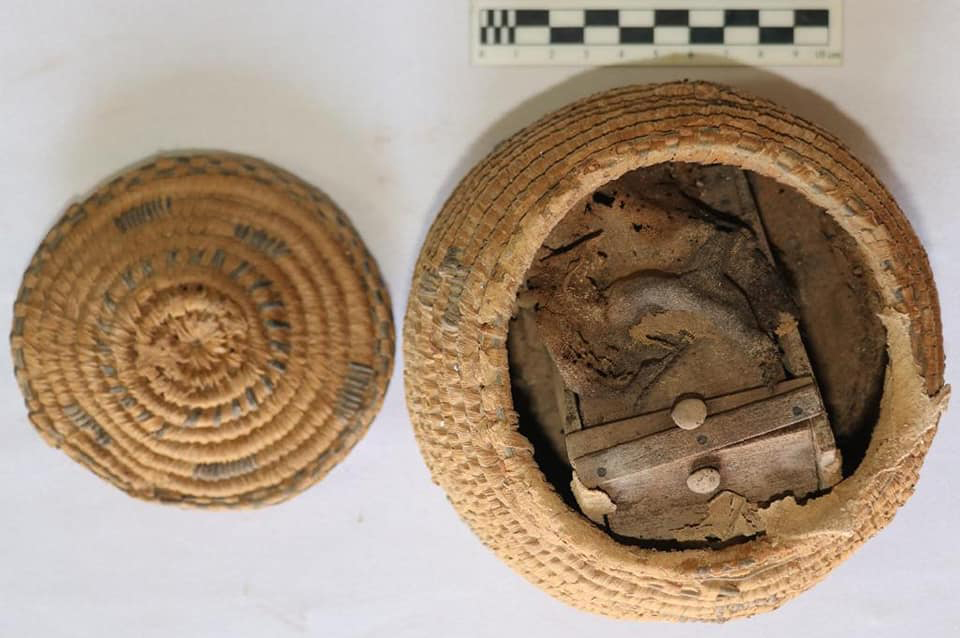 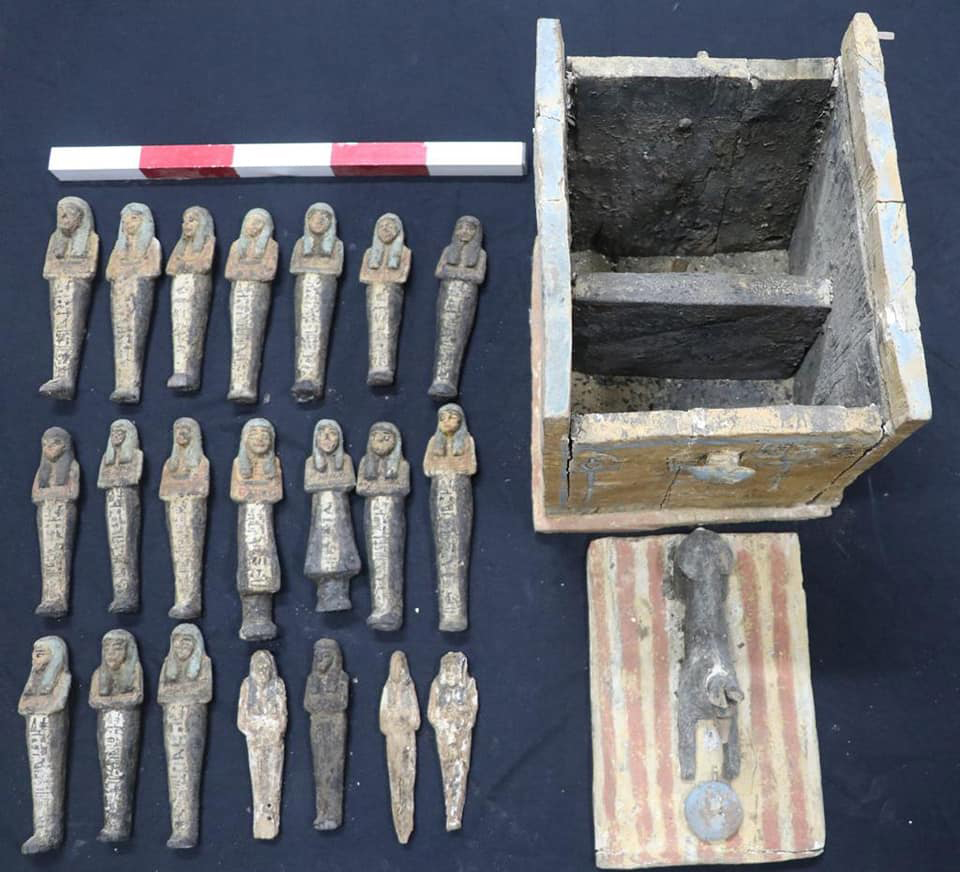 At a site located next to the pyramid of Pharaoh Teti

Egyptian archaeologists in Saqqara brought to light a new massive set of discoveries, mainly following the excavation of newly found burial shafts in the iconic necropolis near Cairo. The team, lead by Zahi Hawass, excavates a site located next to the pyramid of Pharaoh Teti (Old Kingdom, 6th Dynasty), in cooperation with the Ministry of Antiquities and the Zahi Hawass Center at Bibliotheca Alexandrina.

According to the statement by the Ministry of Tourism and Antiquities, the team completed the excavation of a funerary temple completing the burial site of Queen Nearit, Pharaoh Teti’s wife. The excavation uncovered the temple’s complete layout, as well as three mud-brick warehouses attached to the temple on its southeastern side; these stores were built to store temple provisions, offerings, and tools.

The majority of the team’s finds, however, come from 52 burial shafts excavated in the vicinity of Teti’s pyramid. Each shaft was 10 to 12 meters deep and hosted items from burials that took place at least a millennium after Teti’s death; thus showing (according to the excavators) the longevity of the king’s cult and, certainly, the longstanding use of the site as a burial ground. Among the finds, the Ministry has reported more than 50 anthropoid wooden coffins, decorated with scenes depicting various deities as well as excerpts from the Book of the Dead that help the deceased to pass through the journey of the other world. According to the Ministry’s press release, the coffins date to the New Kingdom, during the 18th and 19th Dynasties. However, this view is challenging, as other Egyptologists see a Third Intermediate Period date for the majority of the coffins. “Although there is certainly some New Kingdom material there (from around 1300 BC), many of the coffins are definitely of the 9th or 8th century BC or later (Third Intermediate Period),” comments Dr. Aidan Dodson, Honorary Professor of Egyptology at the University of Bristol.

Archaeologists also unveiled what the Ministry describes as “a luxurious mud-brick shrine dating back to the New Kingdom”, which “reaches to a depth of 24m below the ground level without hitting the burial chamber yet”; it seems to be a reference in a shaft within the shrine. According to the press release, the “open court of the shaft” was paved with well-polished and shiny limestone slabs. Dr. Zahi Hawass believes that this shaft was not looted by thieves, and it will be fully disclosed.

The group of finds from this shaft are considered as one of the most important discoveries ever reported from the Saqqara region. In particular, archaeologists reported funerary masks, a shrine dedicated to the god Anubis (Guardian of the Cemetery), statues that represent deities such as Osiris, Ptah-Sokar-Osiris, and Anubis as well as shabtis and other statuettes of wood, stone, and faience. Of particular importance is an impressive papyrus recording Chapter 17 Book of the Dead, whose length reaches 4m. In length and 1 m. in width. The papyrus bears the name of its owner, Pw-Kha-Ef, a name also found on four ushabti, statuettes, and on an anthropoid wooden coffin from the same context. The mission also found game-boards for games such as Senet and the so-called “Twenty game”  – the latter with the name of the player recorded. Many artifacts were found that represent birds such as geese, as well as a magnificent bronze ax, indicating that its owner was one of the army leaders of their time.

One of the shafts also bore a wonderful well-preserved limestone stele ascribed for a man named Kha Ptah, overseer of the king’s military chariot, and his wife Mutemwia.

In front of the man and his wife, six of their daughters and sons are depicted in two registers, the upper one for seated daughters smelling the lotus flowers and the lower one for standing sons. All daughters, plus the one pictured next to her parents have their hair adorned with unguent cones.

One of their daughters bears the name Nefertari and one of his sons was named Khaemwaset; the names are known from two prominent members of the family of 19th Dynasty Pharaoh Ramesses II (namely his beloved wife and one of his sons who acted as High Priest and gained posthumous fame as a sage). This detail probably allows archaeologists to date the stele during the reign of Ramesses II or shortly after. To that date also point the associated quantities of pottery dating back to the New Kingdom, including pottery that gives us evidence about the commercial relations between Egypt and Crete, Syria, and Palestine. This discovery confirmed the existence of many workshops that produced these coffins, which were bought by the locals, as well as mummification workshops.

Preliminary studies on mummies, in particular those of a woman and a child, were conducted by Dr. Sahar Selim, a professor of radiology at Qasr al-Aini.  Using X-ray, Dr. Selim determined that the woman suffered from a chronic disease known as “Mediterranean fever” or “swine fever”, a disease that comes from direct contact with animals and leads to an abscess in the liver.

According to Dr. Zahi Hawass, this discovery is considered “the most important archaeological discovery during the current year and will make Saqqara, along with other discoveries, an important tourist and cultural destination”. It also rewrites the history of Saqqara during the New Kingdom, in addition to “confirming the importance of the worship of King Teti during the 19th Dynasty of the New Kingdom.”

One of the most important necropoleis in the world, home to the earlier pyramid, the earlier version of funerary texts, an extended Serapeum, and countless elite tombs dating from the Old Kingdom and up to the Late Period,  Saqqara has made headlines lately as the site where archaeologists have brought to light a mummification workshop and funerary shafts with an unprecedented number of coffins.  But as it seems, there is more, and Egyptian heritage authorities are more than willing to unveil and enhance it.