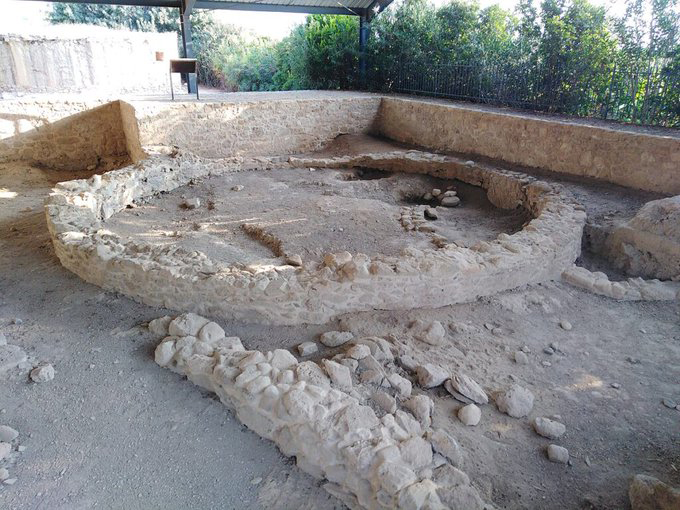 Conservation and restoration at the site of Kissonerga-Mosfilia

The Ministry of Transport, Communications and Works, Department of Antiquities, announces the completion of the conservation and restoration of the Chalcolithic roundhouse replica at the site of Kissonerga-Mosfilia in the Pafos District.

The Department of Antiquities, Cyprus and The Cyprus American Archaeological Research Institute (CAARI), in collaboration with the Kissonerga Community Council, carried out a project for the conservation and restoration of a reconstructed mudbrick prehistoric roundhouse that serves as a Visitor centre at the important Chalcolithic archaeological site of Kissonerga-Mosfilia. The project is funded through a Shepard Urgent Action Grant from the American Society of Overseas Research (ASOR) and will be completed over the coming months.

The replica was constructed in 2010 using authentic materials and techniques, within the fenced site of Kissonerga-Mosfilia. Heavy rains over recent years had damaged the structure and it was in urgent need of repair. The actual building chosen for the reconstruction was Building 3, dating to the Late Chalcolithic period (around 2800–2400 BC) and the original archaeological foundations are visible in the excavated area that is open to visitors. The building is also known as the ‘Pithos House’ as it contained an unprecedented number of storage vessels and is of international renown, discussed widely in the archaeological literature. It was originally excavated and published by Professor Edgar Peltenburg of the University of Edinburgh.

With a diameter of 9 metres, the ‘Pithos House’ is the largest Late Chalcolithic building at the site. The building was destroyed by fire, leaving a uniquely rich assemblage of goods preserved on the floor of the house, providing multiple strands of evidence for life in the Chalcolithic. There were around 280 objects found within the building. In addition to at least 37 storage vessels found in their original place, other finds include exotic faience beads, evidence for copper working, and one of only two stamp seals known from this period. The fire also left evidence of the different activities undertaken by the people using the roundhouse. These include tool manufacture, food and liquid preparation and consumption, and possibly the earliest known olive press on the island. The fierceness of the fire suggests that many of the storage vessels may have contained olive oil. The archaeological assemblage found within has been digitally rendered and used to illustrate bilingual infographic posters affixed to the interior walls.

The impetus behind the reconstruction was to enable visitors to the site to engage with prehistory and to raise awareness of cultural heritage through employing tourism and educational tools to integrate the archaeology into an accessible narrative.

The positioning of the structure adjacent to the authentic archaeological foundations allows the visitor to gain a real appreciation of how dwelling within a roundhouse would have been.