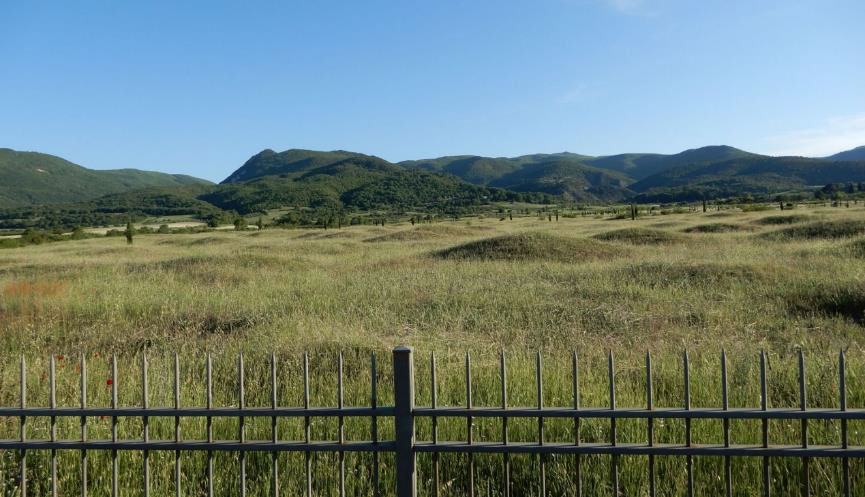 And the Royal "Temenides" Tomb Cluster

“Keeping to the principles of sustainability, it is our duty to pass on to the next generation our monuments and cultural heritage that are directly connected to our national identity”, said Minister of Culture and Sports Lina Mendoni, opening the Archaeological Park of the Aigai Necropolis and the Royal “Temenides” Tomb Cluster which are an UNESCO World Heritage Site.

“We also have to promote all this national reserve, because both our contemporaries and the next generation have a right to it. Culture functions as a unique economic and development tool”, said the minister, adding: “It is in its culture that this country must invest. Only by intervening in the field of culture, can our tourism industry become competitive”.

Governor of Central Macedonia Apostolos Tzitzikostas also referred to the need to support culture as a pillar in developing the country’s economy. “It is our duty to support the archaeological work and culture of our region”, said Mr. Tzitzikostas, pointing out that in the last 13 years more than 45 million euros have been given towards cultural works.

“Promoting and linking our culture with our country’s development is the core of our policy in the Region of Central Macedonia and this goal is achieved in practice by promoting its history around the world. Culture is the passport to a better future,” he said.

A total of 21 tombs came to light in the Royal Tomb Cluster, dating from the beginning of the 6th to the beginning of the 3rd pre-Christian century. The park was created in the vast area of the necropolis. “The place taken up by the dead is large because the Macedonians were not in the habit of conducting one burial on top of another”, explained head of the Imathia Ephorate of Antiquities Angeliki Kottaridis who gave the minister a guided tour of the site.

In the archaeological park, which has been systematically fenced, 7,500 trees were planted ‒ “all of them from the region so the birds can have food all year round”, as Ms. Kottaridis noted ‒ and supervisory material and protection shelters were placed next to and over mounds and in the older part of the Royal Tomb Cluster.

The park occupies an area of 133.4 acres and includes 530 surviving visible burial mounds. It was created as part of the Imathia Ephorate of Antiquities’ implemention of the Regional Business Programme of Central Macedonia “Protection and enhancement of the cemetery of Burial Mounds and the ‘Temenides’ Tomb Cluster” (2012-2015).

The impressive frescoes of Saint Dimitrios

Earlier, Ms. Mendoni visited  Saint Dimitrios Palatitsion in Aigai. The minister was impressed by the church built in the 16th century and an integral part of the timeless archaeological site of Aigai and a UNESCO monument.

The first to recognize the importance of the monument was the late Manolis Andronikos, who while a student of Archaeology in 1940, contributed to its research with a short article on one of the monument’s many inscriptions.

The church remained closed and in poor condition for decades. However, after the relevant studies were prepared and approved, it was included in the action plan of the Imathia Ephorate of Antiquities and from 2017 to 2019, with funding from the Ministry of Culture, the church was stabilized, conserved and fully restored.

After visiting Saint Dimitrios, pausing to take in every detail of the impressive murals, Ms. Mendoni, accompanied by Mr. Tzitzikostas, went to the new Polycentric Museum of Aigai, which is expected to be ready next year, and which the Governor said would be “comparable to that of the Acropolis”.

On Saturday morning, Ms. Mendoni had meetings with Mayor of Edessa Dimitris Giannou and the Metropolitan of Edessa, Pella and Almopia, while she also visited Varosi ,the town’s monuments and Longos.