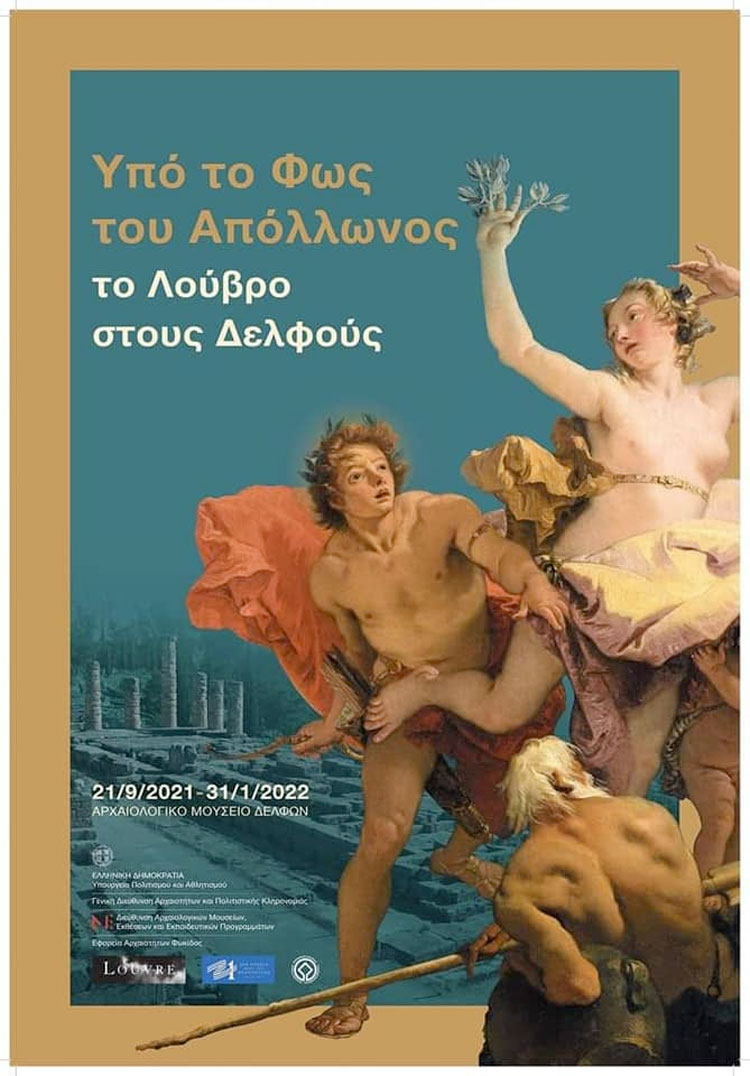 Under the light of Apollo: The Louvre in Delphi

At the Archaeological Museum of Delphi

Minister of Culture and Sports, Lina Mendoni, opened the exhibition “Under the Light of Apollo: The Louvre in Delphi” at the Archaeological Museum of Delphi, in the presence of the Honorary President-Director of the Louvre Museum, Jean-Luc Martinez. The exhibition, which will run until January 31, 2022, is a scientific collaboration between the Louvre Museum and the Phocis Ephorate of Antiquities. As the Minister explained in her greeting, it is part of the celebrations for the 200th anniversary of the Revolution of 1821 and is closely connected with the major anniversary exhibition dedicated to Greece and organized by the Louvre Museum, entitled “Paris-Athens. The birth of modern Greece, 1675-1919”. The exhibition at the Louvre, in which Greek museums are participating with exceptionally significant works, was opened on Monday, September 27th by French President Emanuel Macron and Greek Prime Minister Kyriakos Mitsotakis.

In her greeting, Ms. Mendoni mentioned that “It was no accident that Delphi evolved into the center of the ancient world, as it is not accidental that its splendor and radiance has been preserved to this day. This has led to its surroundings with their natural, sacred and anthropogenic features to be recognized as a world cultural asset. The Delphic Landscape is rightly a symbol of outstanding universal significance, included on the list of UNESCO World Heritage Sites. At the same time, it is an internationally recognized name, a brand name with definite potential for growth. The Exhibition “Under the Light of Apollo: The Louvre in Delphi” pays tribute to Delphi’s global and timeless value “.

The Delphi exhibition comprises 28 rare masterpieces from the Louvre collections – antiquities of Greek, Egyptian and Cypriot origin, dating to 1400 BC, as well as works of art from the 17th, 18th and 19th century- placed in groups among the Museum’s permanent exhibition in such a way that they are in direct conversation with some of its most important exhibits .

“This conversation’s objective is to show the humanistic origins and effects of the cult of Pythian Apollo, the spiritual radiance of Delphi through the centuries, the influence of Apollonian mythology on European political philosophy and art, as seen through the works of French painting. This conversation also aims to present a fresh, topical view of Delphic archaeology, as an occasion for the modern “pilgrims” of the Delphic Oracle to reflect personally and collectively on both the world today and its future with regard to the “Apollonian light”, said Ms. Mendoni.

The Minister of Culture did not fail to add that regarding” this extremely important project from a scientific and aesthetic point of view and the unique opportunity it offers all of us gathered here to admire some of the most important creations of the human spirit, warm thanks and congratulations are due to all those involved: to the Director of the Phocis Ephorate of Antiquities Nancy Psaltis and all the Ephorate staff, and of course to the administration of the Louvre Museum and Professor Martinez in particular, for the loan of the treasures from its collections. Lastly, warm thanks also to the president of the Association of Friends of the European Cultural Center of Delphi Mrs. Dimitra Filippou, for the music accompanying tonight’s event and her overall contribution”.