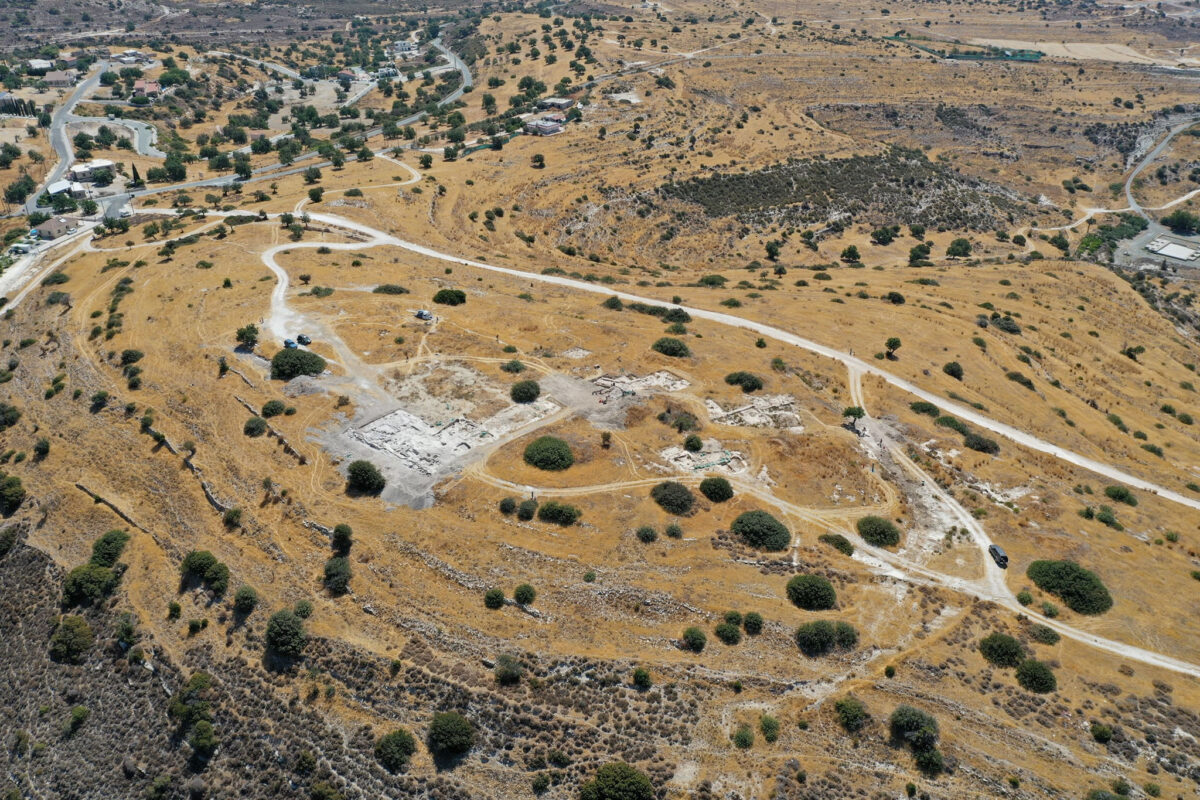 By the Italian archaeological mission

by Archaeology Newsroom
The Department of Antiquities, Ministry of Transport, Communications and Works announces the completion of the 2021 fieldwork season of the Italian Erimi Archaeological Project at Laonin tou Porakou, where a team from the University of Siena, directed by Prof. Luca Bombardieri, successfully investigated an extended area of the Middle Bronze Age settlement.
The ancient site is located on a high plateau on the eastern Kouris river bank. During the 2021 season, four relevant coeval contexts different in use and function have been excavated, aiming to clarify aspects of the ideology and social development of the prehistoric community of Erimi.
The investigation of the workshop complex on the top of the hill revealed that this area, mainly intended for the production of dyed textiles, had a pivotal role and a peculiar ideological significance for the Erimi community. By extending the investigated area towards the northern wing of the complex a series of three new roofed units (SA XIII, SA XIV, SA XV) were fully excavated. The location of these units in the northernmost extension of the atelier, facing the valley cliff, is a strong indication of the coherent design of the complex, which now appears to be characterized by a central working open courtyard enclosed by three series of parallel closed building rooms to the North, West and South.
To the West, unit SA XIV (3,00×1,60m.), along with the adjacent unit SA XV (4,60×2,60m.), formed the northernmost extension of the complex. SA XV appears directly open to the North through a small entrance into a massive wall. Such an entrance may be connected to a possible path running from the Kouris river to the workshop complex. A complete small installation devoted to the processing and food preparation has been found in the adjacent unit SA XIV to the West. The installation is equipped with two spaces separated by vertical limestone slabs where a mortar, a grinding stone and a clay mealing bin were located. Both these units were opened to the South to a large open courtyard (WA 7).
It is likely that SA XIV and SA XV formed a functional annex connected with the major unit SA V. This compound functioned as a small workshop shrine with ritual function, presumably connected with the productive activity and its ideological implications. In this view, the presence of a small kitchen installation in the unit SA XV could be interpreted as a space for food preparation specifically connected with the ritual performances that may have taken place in the workshop shrine.
To the East, a large rectangular unit was also fully investigated (SA XIII, 5,70×5,20m.). This unit appears to have first served as a working space equipped with basins and mortar-like installations, which was later on transformed into a roofed space directly connected through a stepped monolithic threshold to the storage space SA XII, excavated in 2019.
The excavation in the residential quarter revealed a long-term use and transformation of the settlement layout, with a domestic space (unit 6) in Area T2. Unit 6 (5,70×4,50m.) located in the northernmost extension of the residential quarter has been fully investigated. This large rectangular roofed space is limited on the four sides by massive walls preserved up to five courses leaning on a base carved out on the natural limestone terrace. The entrance to the unit is located to the west through a step directly carved into the bedrock. The stratigraphic sequence within the room revealed that the unit was severely destroyed by fire. The collapsed materials pertaining to the walls and roof structures sealed an extremely rich assemblage of ceramic containers, including 9 pithoi and 40 small and medium-sized vessels with a large repertoire of cooking pots and fine table ware types. Additional materials recovered in the collapse filling are terracotta spindle-whorls and groundstone tools.
Given the unusual number of objects deposited on the floor, it seems likely that this room may had been deliberately filled with objects originally not used in this room before being destroyed by fire. Such an action can be paralleled to the already observed ritual destruction carried out in the workshop complex before the abandonment of the settlement at the latest stage of Middle Bronze Age period.
Additionally, an extension of the large circuit wall previously traced back in Area, which segregates the settlement and the extra-mural funerary clusters (Area E, southern cemetery), has been cleared to the South.
Finally, a series of fixed physical topographical points and an aerial photo acquisition by a drone has been conducted with the aim of mapping and creating a general 3D model of the hill and settlement.
The fieldwork season involved a team of archaeologists of the University of Siena and Pisa, with a joint support of an archaeobotanist from Τhe Cyprus Institute and a team of two restorers from the Conservation School of the University of Torino.
The fieldwork was carried out under permit and thanks to the scientific collaboration of the Department of Antiquities of Cyprus, in an on-going positive collaboration with the staff of the Archaeological Museum of the Lemesos District as well as of the Local Archaeological Kourion Museum, Episkopi.