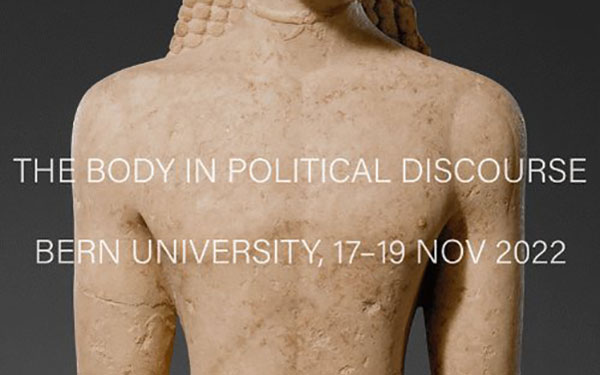 The Body in Ancient Political Discourse

This is a quick reminder that the Call for Papers for the conference “The Body in Ancient Political Discourse”, taking place at Bern University from 17th to 19th November 2022, is due this week, 15th May.

The political systems of Antiquity were based to a large extent on face-to-face interaction. In this constellation, typical of pre-modern cultures, the human body plays a prominent role: not only does communication in personal presence necessarily involve physicality, but the body can also express identities, hierarchies and power relations in a particularly powerful way. Against this background, the conference aims to examine the role of the body in the political process in a perspective spanning Greco-Roman antiquity as a whole, using as an orientation the question of the significance of the body for the development of political discourse. The term of “political discourse” is thereby understood in the sense of the production of knowledge (in various media) about power and the powerful as well as about practices of power distribution. Knowledge about bodies and power is not only created in textual descriptions of bodies, but it also underlies their pictorial representations and, ultimately, shapes bodily appearances themselves. Understanding the term in this broad sense can therefore facilitate an interdisciplinary approach that integrates texts, images and practices.

Methodologically, the conference is based on a twofold observation: On the one hand, the bodies themselves are shaped through culture and discourse; on the other hand, bodies possesses a physical resistiveness that necessarily limits such formations. This double nature makes the body functional in political discourse in a double way: it can be shaped into an ideal or a grotesque, even metaphorically symbolising the political order as a whole, but the participants in political discourse also possess physical bodies that are used performatively in the political arena and whose use is in turn observed and interpreted by others.

The aim of the conference is to trace continuities and changes in political discourse on the body from Archaic and Classical Greece through Hellenism, Republican and Imperial Rome to Late Antiquity. Greco-Roman Antiquity is a particularly interesting case here because the role of corporeality in changing political systems – from autonomous civic community to monarchy – can be traced particularly well for this period. In addition, a change in the framework of discourse also took place throughout Antiquity that manifested itself, for example, in the successive establishment of Christianity as an extraordinarily body-related religion.

The conference will focus on the following aspects:

The call for papers is addressed to scholars from all disciplines of classical studies. Confirmed speakers include Véronique Dasen (Fribourg), Thomas Späth (Bern) and Adrian Stähli (Harvard). Presentations of ca. 30 minutes can be given in German, English or French. If you are interested, please send an abstract of no more than 300 words and a short CV to [email protected] by 15th May 2022. Travel and accommodation costs can be covered in full (subject to funding).