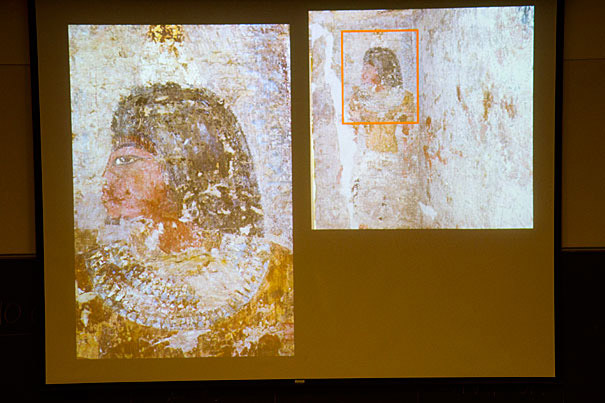 The Queen and the Sculptor

A lecture aiming to reconstruct the life and death of the man who created the now iconic bust of Nefertiti took place in Harvard recently. Delivered by French Egyptologist Alain Zivie,  the director of the French Archaeological Mission of the Bubasteion and this year a visiting scholar at Harvard’s Semitic Museum, the lecture“Discovering the Egyptian Queen Nefertiti’s Artist,” reminded the audience of Pharaoh Akhenaten’s official court sculptor, Thutmose.

Thutmose’s workshop -where the bust of Nefertiti was found alongside other masterpieces and studies of similar subject- was located in 1912 in Tell el Amarna by German Egyptologist Ludwig Borchardt and his team. Zivie seems to have continued Borchardt’s work as in 1996, during his own excavations in Saqqara, on the area of Boubasteion, he revealed a tomb made to house the body of a certain Thutmose. Now, Zivie’s academic interest is to define whether the Thutmose of the studio in Amarna is the same as the Thutmose whose tomb he discovered farther north in Saqqara. And he hopes the two Thutmoses, the one who was a sculptor at Amarna and the one who was buried in Saqqara, are actually the same person.

Tombs “are sometimes small holes,” and may be hard to identify for what they are. Thutmose’s was small and it stank, said Zivie, and was “not very attractive at first.” The area of the Thutmose tomb is called Bubasteion, which is now less about mummified pets (thought to number in the millions) and “more and more a New Kingdom necropolis”.

Zivie made his case for the historical Thutmose, a man he called “an exceptional artist who made his own tomb.” He showed his audience the inside. To the left are three preserved painted walls that form a sort of autobiographical triptych. “It’s a lifetime passing by,” he said of the pictures, which include Thutmose, his wife, and children.

Zivie showed one slide that was a detail of “the wife of the master, painted by himself,” which “is so moving.” So was the depiction of the artist and his wife, in full face and figure, painted together on a double coffin. “It’s moving because we know it is Thutmose himself,” said Zivie. “He painted himself dead.”

Central to the triptych is what Zivie called a metaphor of the artist’s life, a small horizontal palette of many colors, similar to the one of ivory found in the studio in Amarna. It was with paint, he said, that the master gave to sculptures “the final touch of life.”

Is it truly the tomb of Thutmose, the artist whose name hovers behind Nefertiti’s memorable face? At lecture’s end, Zivie admitted “the story is unfinished.” The jury of scholars is still out, later agreed Peter Der Manuelian, Harvard’s Phillip J. King Professor of Egyptology and director of the Semitic Museum. “More evidence would be nice, but the contemporaneity works.”

“You have me 98 percent convinced.”, said Egyptologist Jacquelyn Williamson, a Harvard Divinity School affiliate and a specialist in the Amarna Period. She is a visiting lecturer in Women’s Studies and Near Eastern Studies and in spring will teach a course on gender and sexuality in cultures pre-dating the Bible.

Zivie made his last trip to the Saqqara site last November. It was cut short by Egypt’s political turmoil. But he made the audience an offer. “You are welcome when you pass [by] in Egypt,” said Zivie of the artist’s tomb, “to see with your own eyes.”