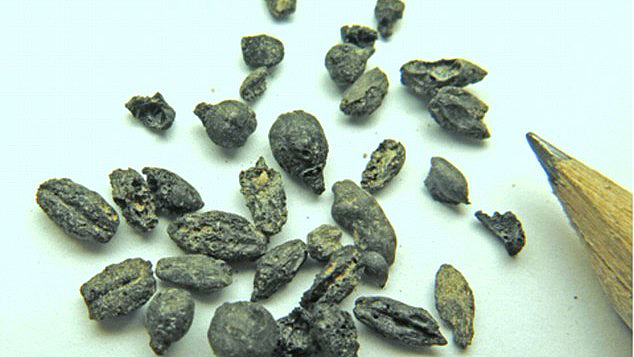 Negev grape seeds from the Byzantine era have been found for the first time, as the Israel Antiquities Authority announced. These grapes were used to produce “the Wine of the Negev” — one of the finest and most renowned wines in the whole of the Byzantine Empire.

The charred seeds, over 1,500 years-old, were found at the Halutza excavation site in the Negev during a joint dig by the University of Haifa and the Israel Antiquities Authority.

“The vines growing in the Negev today are European varieties, whereas the Negev vine was lost to the world. Our next job is to recreate the ancient wine, and perhaps in that way we will be able to reproduce its taste and understand what made the Negev wine so fine,” said Prof. Guy Bar-Oz of the University of Haifa, director of the excavation.

The archaeologists know of “the Wine of the Negev” or “Gaza Wine” — named for the port it was sent from to all corners of the empire — from historical sources from the Byzantine period. This wine was considered to be of very high quality and was very expensive, but unfortunately, it did not survive to our day, so we do not know what it was that made it so fine.

In earlier excavations in the Negev, archaeologists found the terraces where the vines were cultivated, the wineries where wine was produced, and the jugs in which the wine was stored and exported, but the grape seeds themselves were not found.

All this, as we said, until the current excavation at the Halutza National Park, which is part of a bio-archaeological study examining the causes of the rise and fall of the Byzantines in the Negev. The study is directed by Prof. Guy Bar-Oz and Dr. Lior Weisbrod of the Zinman Institute at the University of Haifa, in collaboration with Dr. Tali Erickson-Gini from the Israeli Antiquities Authority.

Like elsewhere in the Negev, the stone buildings at Halutza — which in its heyday was the most important Byzantine city in the Negev — did not survive due to stone theft over the ages. But, as often happens in archaeological excavations, the archaeologists actually found their rare finding in the refuse dump.

According to Prof. Bar-Oz, the city’s refuse dumps, or middens, were preserved almost completely intact and now mark the boundaries of the ancient city. They are so conspicuous they can be detected on satellite images, such as those of Google Earth.

Pottery and coins discovered in the refuse indicated that they accumulated mainly during the sixth to seventh centuries AD, a time when the city was flourishing. With the urban collapse of Halutza in the mid-seventh century, for reasons not yet clarified, organized waste disposal was stopped and it appears that the city and the middens surrounding it were abandoned.

In the ancient piles of refuse, the researchers found a particularly high concentration of fragments of pottery vessels used for storage, cooking and serving, which included a significant number of Gaza jugs used for storing the ancient Negev wine. The archaeologists also found a wealth of biological remains, including animal bones: bones of Red Sea fish and shellfish from the Mediterranean that were imported to the site, which indicated the vast wealth of the Byzantine city residents.

The highlight, however, were the hundreds of tiny charred grape seeds. According to the archaeologists, this is the first time “Negev” grape seeds have been found, something that will provide first-of-its-kind direct evidence of the wine cultivated in the western Negev in ancient times.

Exposing the tiny seeds in the piles of refuse was not easy: For the first time strict and fine excavation methods were used during the dig that included fine sifting and flotation of botanical remains, which float after the soil settles. These methods made it possible to extract the botanical finding from the Byzantine material.

“After washing the dirt and gently sifting the findings all that remained was to separate the botanical findings, which included seeds, pits and plants remains, from small animal bones, which included the remains of rodents that were drawn to the refuse,” explained Prof. Bar-Oz.

As mentioned above, the vines from which our ancestors produced the wine famous throughout the Byzantine Empire did not survive and researchers today do not know whether these were imported species from elsewhere — as is the case with the vines cultivated in the Negev today, which are originally French or Italian — or whether these were native varieties that had been lost to the world. The next stage of the study is to join forces with biologists to sequence the DNA of the seeds and in this way to discover their origin. “European varieties require copious amounts of water. Today it is less of a problem thanks to technology, but it is unlikely that that was the case 1,500 years ago. It is more interesting to think of local grape varieties that were better suited to the Negev. Maybe the secret to the Negev wine’s international prestige lay in the method by which the vines were cultivated in the Negev’s arid conditions,” the archaeologists are asking.

This discovery is exciting for local wine growers and for the archaeologists, and they all hope to reveal the secret of the Negev vines in order to recreate the ancient wine, and by so doing, to finally understand why it was famous throughout the Byzantine Empire — in Egypt, Greece, Italy, and Spain.

The Byzantine city of Halutza, or Elusa in Greek, was founded by the Nabataeans but reached its prime during the Byzantine period between the fourth and seventh centuries, AD. The city then grew to become the largest and most important of all the Byzantine cities in the Negev. Archaeological and historical evidence indicate