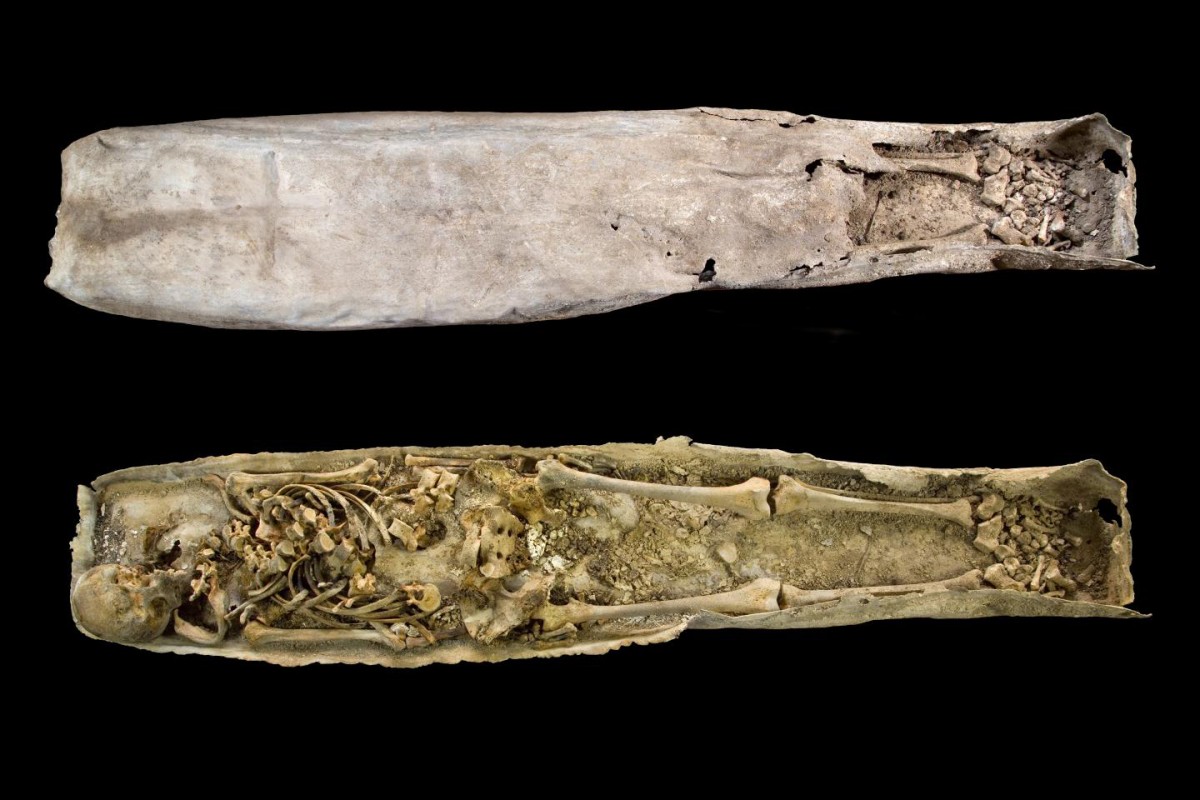 A mysterious lead coffin found close to the site of Richard III’s hastily dug grave at the Grey Friars friary has been opened and studied by experts from the University of Leicester.

“This is the first stone coffin in Leicester to be excavated using modern archaeological practices. This makes it a unique discovery which will provide important new insights into the lives of the people of medieval Leicester,” said Mat Morris, archaeological lead, University of Leicester.

The coffin was discovered inside a much larger limestone sarcophagus during a second excavation of the site, in August 2013 – one year after the remains of the former King of England were unearthed. Richard III will be reinterred at Leicester Cathedral this month (March) after his mortal remains are taken from the University of Leicester on Sunday 22 March.

Inside the lead coffin, archaeologists found the skeleton of an elderly woman, who academics believe could have been an early benefactor of the friary – as radiocarbon dating shows she might have been buried not long after the church was completed in 1250 (although analysis shows her death could have taken place as late as 1400).

The high status female was in one of 10 graves discovered in the grounds of the medieval complex, including that of Richard III, six of which were left undisturbed. Those that were examined were all found to have female remains.

Grey Friars site director Mathew Morris, who led the dig said: “Although it might seem unusual that Richard III is the only male skeleton found inside the Grey Friars church, the other four skeletons all being female, it must be remembered that we have only excavated five of ten identified graves in the church’s chancel with the potential for hundreds more burials elsewhere inside the church, the other friary buildings and outside in the cemetery.

“In Leicester, ULAS’s excavation of the medieval parish church of St Peter (today situated beneath the John Lewis store in Leicester’s Highcross retail quarter) found that the burial of men and women inside the church was broadly equal.

“Statistically, the sample is too small to draw any conclusions to the significance of so many women at Grey Friars. After all, if we carried out more excavations it is possible that we could find that these are the only four women buried in the church. Richard III would certainly not have been the only male buried here during the friary’s 300 year history and historic records list at least three other men buried in the church. What stands out more is the contrast between the care and attention taken with these burials – large, neatly dug graves with coffins – and the crudeness of Richard III’s grave. The more we examine it, the clearer it becomes how atypical Richard III’s burial really was.”

The lead coffin, with an inlaid crucifix, the location of her burial in presbytery of the friary’s church (possibly close to the high altar) meant that she had a special significance to the holy Catholic order.

The discovery is the first example of an intact medieval stone coffin to be unearthed in Leicester during modern excavations.

Mathew Morris added: “The stone sarcophagus was a tapered box carved from a single block of limestone. Inside, the wider end was curved, creating a broad head niche.

“Unfortunately, the stone lid did not properly fit the coffin allowing water to get inside, and its immense weight had badly cracked the sarcophagus, meaning it could not be lifted intact.

“However, inside the inner lead coffin was undamaged except for a hole at the foot end of the casket where the lead had decayed and collapsed inward exposing the skeleton’s feet.

“This is the first stone coffin in Leicester to be excavated using modern archaeological practices.

“This makes it a unique discovery which will provide important new insights into the lives of the people of medieval Leicester.”

Of the other nine sets of remains found at the Grey Friars, during the second excavation, three more were exhumed by University archaeologists, and six left undisturbed.

Two graves inside the choir – where Richard III was found – contained wooden coffins and inside were two females aged between 40 and 50-years-old.

Radiocarbon dating shows there is a 95 per cent probability that they died between 1270 and 1400.

Osteological examinations found that one of the women had a possible congenital hip dislocation which forced her to walk with a crutch.

The other was found to have lived a life of hard physical labour – regularly using her arms and legs to lift heavy weights.

And she was not alone.

A fourth female skeleton, which had been disturbed, was also thought to have believed to had led a life of hard physical work.

She is believed to have died in her early to mid-20s.

Analysis of the three intact sets of female remains – including the lady in the lead coffin – show that all of the women had a highly-varied, protein-rich diet including large amounts of sea fish.

A diverse diet like this would indicate that they would have been wealthy, and were able to consume expensive foods like game, meat and fish.

“Analysis of Skeleton 4 shows that she had a life of hard physical work, frequently using her arms and legs to lift and support weight. It is interesting then that she is buried in an area of the church which would have typically been reserved for wealthy benefactors and people of elevated social status.

“Her presence in this area might suggest that the friary’s main source of donations came from the town’s middle-classes, merchants and tradespeople who were probably of more modest means, and worked for a living.”

There is a small clue as to who is buried at the site, which is in Leicester city centre, just a few yards from Leicester Cathedral where Richard III will be reinterred in March.

But not enough information remains to say with any accuracy whether the records relate to any of the female skeletons found by Mathew and the team.

Documents dating back to the time of the burials – about 700-years – name a lady called Emma, who was married to John of Holt.

In September of that year, the Bishop of Lincoln issued an indulgence granting 20-days off Purgatory for anyone who would say “a Pater and a Ave for the soul of Emma, wife of John of Holt, whose body is buried in the Franciscan church in Leicester”.

However, little is known about her, including what she looked like, her age at death or where in the friary church she was buried.

Mathew said: “We know little about her and a lack of fundamental information, such as her age at death, what she did for a living, what she looked like or where in the church she was buried, coupled with no known descendants who can provide a DNA sample, make it impossible to say for certain whether one of these skeletons is that of Emma, or indeed anyone else. Sadly, they will forever remain anonymous.”