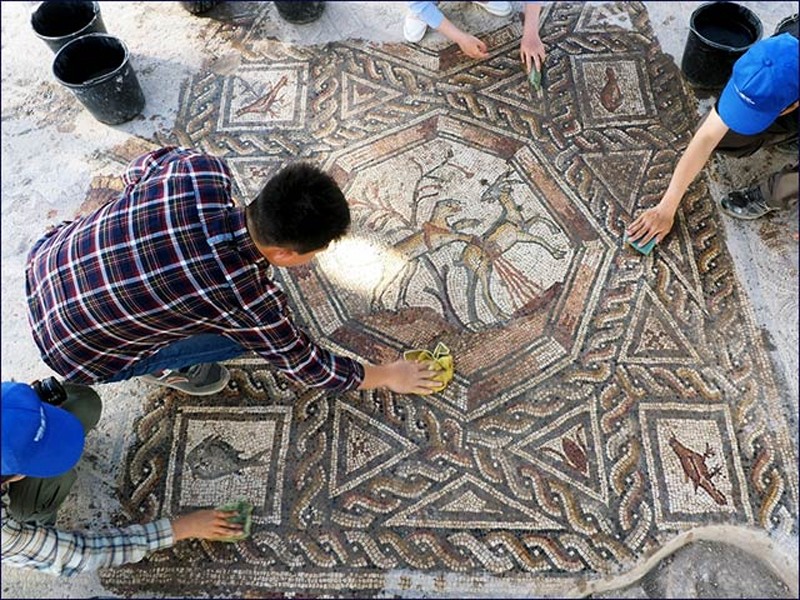 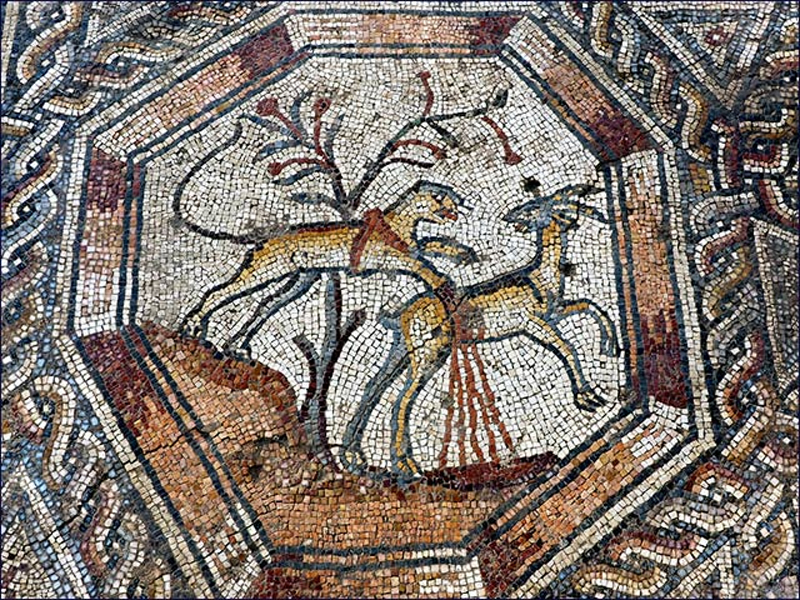 The second high-quality mosaic floor in the southern part of the 1,700-year-old villa

In June-November 2014 a team of archaeologists from the Israel Antiquities Authority directed a large excavation in the Neve Yerek neighborhood of Lod, in an area where a breathtaking mosaic that served as the living room floor in a villa some 1,700 years ago was previously exposed. The aim of the excavation was to prepare the ground for construction of a visitor center, to which the beautiful mosaic will be returned when it completes a series of exhibitions in museums around the world. Important artifacts were discovered in the new excavation, the most notable of which is another colorful mosaic (11×13m) that was the courtyard pavement of the magnificent villa that had the famous mosaic in its living room.

According to Dr. Amir Gorzalczany, excavation director on behalf of the Israel Antiquities Authority, “The villa we found was part of a neighborhood of affluent houses that stood here during the Roman and Byzantine periods. At that time Lod was called Diospolis and was the district capital, until it was replaced by Ramla after the Muslim conquest. The building was used for a very long time”.

The northern part of the complex, where the “Shelby White and Leon Levy Lod Mosaic Center” will be constructed, was exposed when the Israel Antiquities Authority was inspecting development work being carried out in the early 1990s prior to the construction of Highway 90. The mosaic, which was discovered and excavated at that time by the late Miriam Avissar, is among the most beautiful in the country, and has been exhibited in recent years in some of the world’s leading museums, including the Metropolitan, the Louvre and the State Hermitage etc. It is currently on display at the Cini Gallery in Venice, Italy, and in the future it will be housed in the main building to be erected in Lod.

The southern part of the complex was exposed in the current excavations. Among other things, it includes a large magnificent courtyard that is paved with a mosaic and surrounded by porticos (stoas-covered galleries open to the courtyard) whose ceiling was supported by columns. According to Dr. Gorzalczany, “The eastern part of the complex could not be completely exposed because it extends beneath modern buildings in the neighborhood”.

The scenes in this mosaic depict hunting and hunted animals, fish, flowers in baskets, vases and birds.

Dr. Gorzalczany added, “The quality of the images portrayed in the mosaic indicates a highly developed artistic ability”.

Numerous fragments of frescoes (wall paintings prepared on wet plaster) reflect the decoration and the meticulous and luxurious design, which are in the best tradition of the well-born of the period. In light of the new discoveries, this part of the villa will also be incorporated in the visitor center.