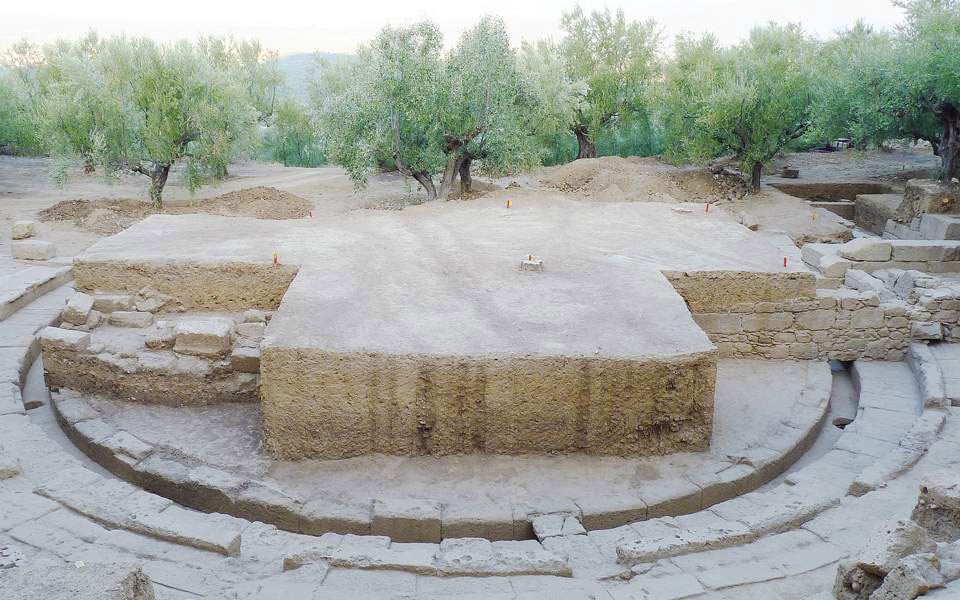 Thouria: The ancient orchestra has been “lit up”

At the highest point of the hill where the ancient city of Thouria lies, inside an olive grove where in 2016 Dr Xeni Arapoyanni discovered the remains of an ancient theatre she had spent years searching for, this year the orchestra was also brought to light.

Its entire perimeter has been revealed, surrounded by a stone conduit for the drainage of rainwater, as well as the first row of seats that have been very well preserved; behind them is a second row of slabs on which seats are resting. On the south part of the koilon, five more rows of slabs stand out with many seats in place.

The archaeologist describes each detail in turn, naturally excited by the results of this year’s excavation period, which started on July 10 and ended September 10. Those who reach the olive grove with an impressive view of the fertile plain of Messenia, known in ancient times as “Makaria” with the “Thouriatis” bay in the distance , the sea of the Messenian Gulf, are confronted with a wrapped up monument. Within a week it was entirely covered with a geotextile and nylon over that. But, hidden beneath the bulk enveloped in plastic there is new data.

“The new find was the theatre’s orchestra” said to the “Kathimerini”, the honorary Ephorate of Antiquities who is excavating in the region under the auspices of the Archaeological Society of Athens. In two months, Dr Arapoyanni accomplished a lot, with two more assistant archaeologists, nine workers, an architect and a topographer helping from time to time. “We have now moved on to excavating the circumference of the orchestra and the lower part of the koilon with the fallen architectural members of the bleachers (kerkides). The orchestra’s diameter is estimated to be about 16.30 m and the area excavated over the two periods is 51.25m from north to south and 28.20m from east to west. This is a big and significant monument. A sturdily constructed theatre that shows the city was prosperous It also indicates that particular effort had been made for this theatre to become part of public life. It is constructed of porous stone like the theatre of Messene. If not for the later intervention by the Christians around the 7th c. AD when everything visible in the theatre was destroyed, much would have been saved”. Dr Arapoyanni dates the theatre from the Hellenistic period, the 3rd c. BC.

There are testimonies to its existence by travellers since 1830. It was, however, two stone blocks that made Dr Arapoyanni believe that the site concealed something; especially the angle of one of them. Her suspicions were confirmed when the geophysical survey was completed by Dr Lazarus Polymenakos. Based on this work, an older site layout plan and surface indications, she managed to locate the theatre with her team. The retaining wall of the theatre’s koilon, which has a height of approximately 4m, was the first finding and this year it is the orchestra. In the summer of 2018, “the removal of orchestra backfill must be completed and the stage building that should be in front of it, the orchestra, searched for. The north and south entrances (parodoi) will also be completely revealed. This year, we uncovered part of the south parodos as well as part of the skenotheke. This was a very important find because three rows of stone grooves were revealed for the wheels of a moving stage to run on! We have something similar in the theatre of ancient Messene. In the theatre of Sparta, such elements have been found, but in the case of Thouria these are distinct″.

There is also the excavation of ancient Thouria at the “Panagitsa” site, which has been interrupted due to landslides on the eastern slopes of the area. “Some measures should be taken to stabilize the rocks. The Peloponnese Region has helped us financially so we can continue.” The site of the Asclepieion has of course been completely excavated and can easily be organized. There is access for those who wish to visit it, and some enhancement work has also been done. “It gives us immeasurable joy to have discovered a monument in such good condition,” Dr Arapoyanni says about the ancient theatre, while avoiding to make a commitment as to the length of the excavation. “A detailed survey is now being conducted of the antiquities brought to light and the puzzle is being completed. A stabilization and restoration study will follow to enhance the site.” Archaeology has its own tempo and no one should put pressure on it. Nevertheless, it does need support. Since the start of the excavations, the following have been sponsors: The Karelia Foundation, Achilleas Konstantakopoulos, the Municipality, the Peloponnese Region; also with the collaboration of the responsible Ephorate, the Ministry of Culture and Sports and the support of the Archaeological Society.